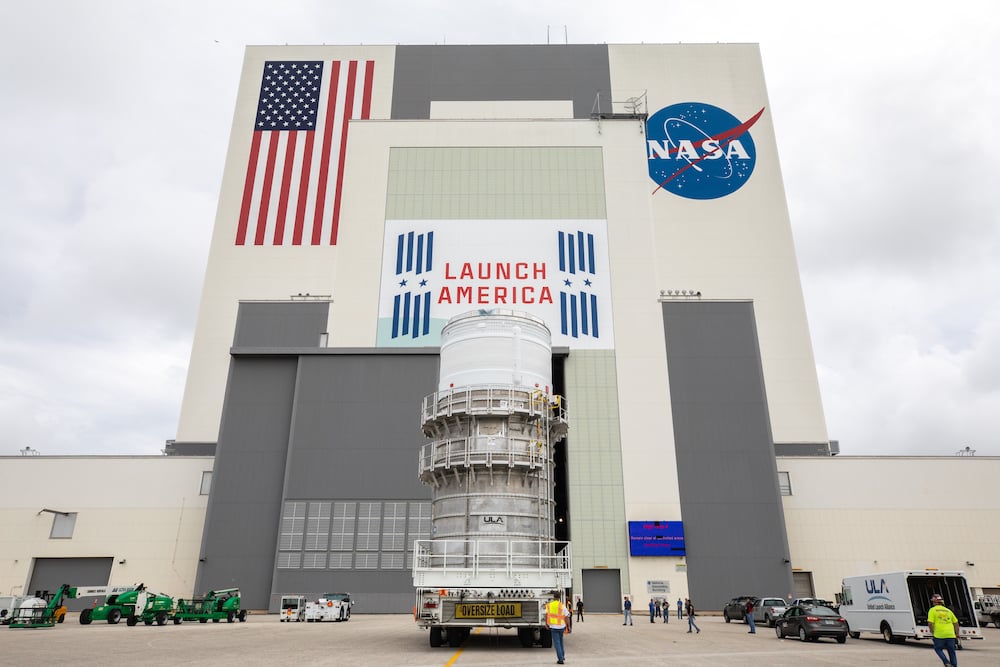 The Interim Cryogenic Propulsion Stage (ICPS) is transported into the Vehicle Assembly Building. Photo by NASA

The Interim Cryogenic Propulsion Stage (ICPS), built by United Launch Alliance (ULA) under a collaborative partnership with Boeing, has been mounted atop the Space Launch System (SLS) rocket to launch NASA's first Artemis mission on a voyage around the Moon and forge a new foundation for human deep space exploration.

The ICPS will deliver the push needed to propel the Orion crew capsule out of Earth orbit towards the Moon for a three-week test flight. It will be an uncrewed mission to validate the SLS launch vehicle and Orion spacecraft prior to flying astronauts on Artemis II. 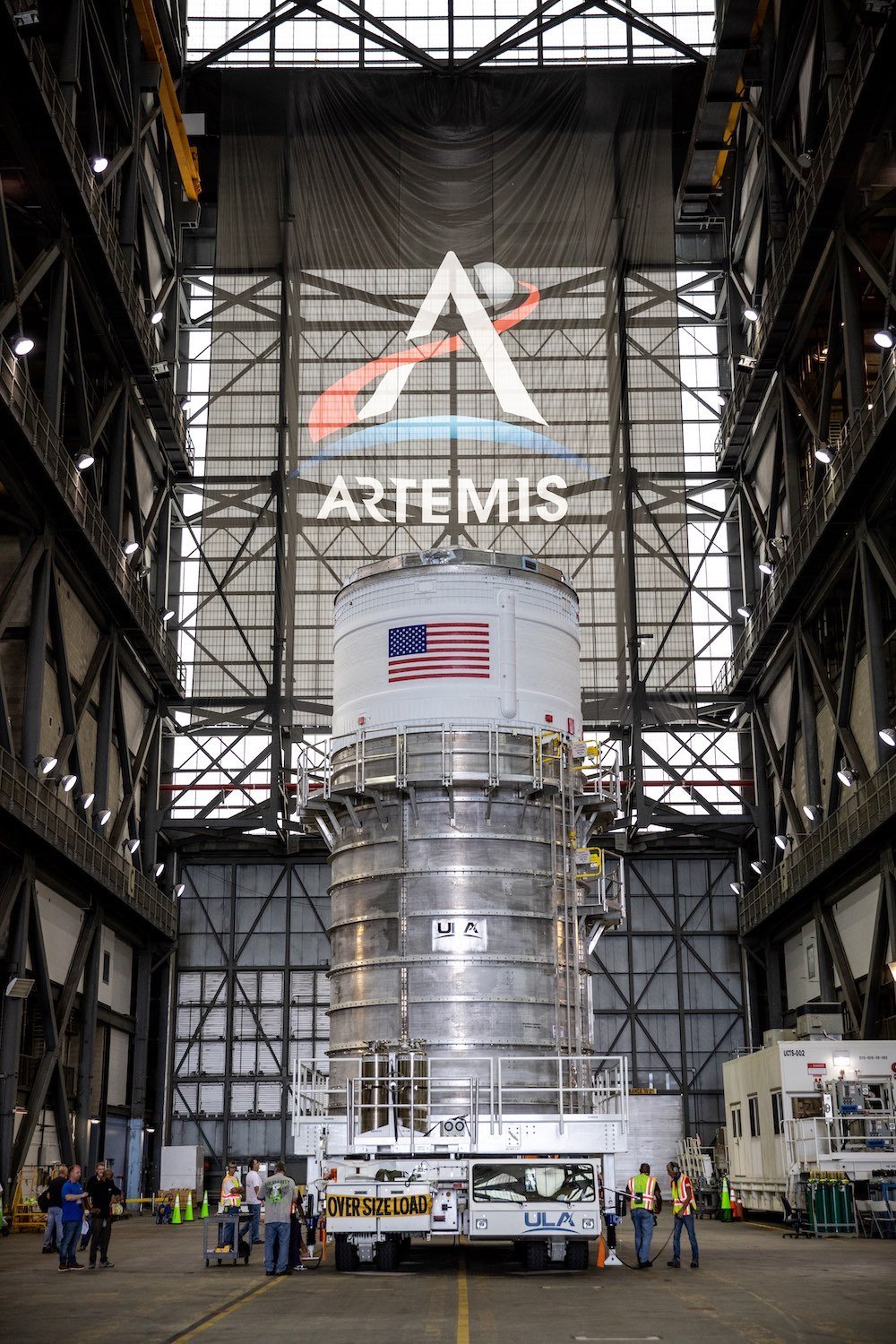 Inside the cavernous Vehicle Assembly Building (VAB) at Kennedy Space Center (KSC) on July 6, the ICPS was hoisted atop the Launch Vehicle Stage Adapter (LVSA). The LVSA, which protects the ICPS engine during launch, connects the core stage and the ICPS. The high bay where SLS is being assembled is the same hallowed ground where Saturn V rockets and space shuttles were readied for flight.

Manufactured at ULA's rocket factory in Decatur, Ala., the ICPS is a modified version of the five-meter-diameter Delta Cryogenic Second Stage (DCSS) that has flown 24 times on Delta IV missions since 2004 with 100 percent mission success.

The ICPS features a slightly larger liquid hydrogen tank as compared to the Delta IV second stage, as well as electrical and mechanical interfaces specific to attaching and supporting the Orion spacecraft, and a second hydrazine bottle for additional attitude control propellant.

Nearly an hour after liftoff from Kennedy's launch pad 39B, ICPS will ignite for the Perigee Raise Maneuver to refine the preliminary orbit around the Earth. Approximately a half-hour later, the Trans-Lunar Injection (TLI) burn will occur to commit Orion on a trajectory to the Moon. The TLI engine firing by the RL10B-2 engine will last nearly 20 minutes to increase Orion's velocity.

After separating from Orion, ICPS will then continue its journey by deploying several CubeSats that are mounted in the Orion Stage Adapter (OSA), a part that connected the ICPS to Orion. The CubeSats, which have science and technology missions of their own will be deployed and with their own propulsion systems head to the Moon, asteroids and other deep space destinations.

ULA is building three ICPS stages for each of the first three Artemis missions to the Moon. As the name implies, it is the interim upper stage solution for early SLS launches until the Boeing-made Exploration Upper Stage (EUS) is built, tested, and ready to fly.

This week's integration of ICPS onto the SLS marks a major achievement years in the making. After completing rigorous checkouts at ULA facilities, the stage was delivered to NASA's Multi-Payload Processing Facility where it was fueled with hydrazine for its pointing thrusters. 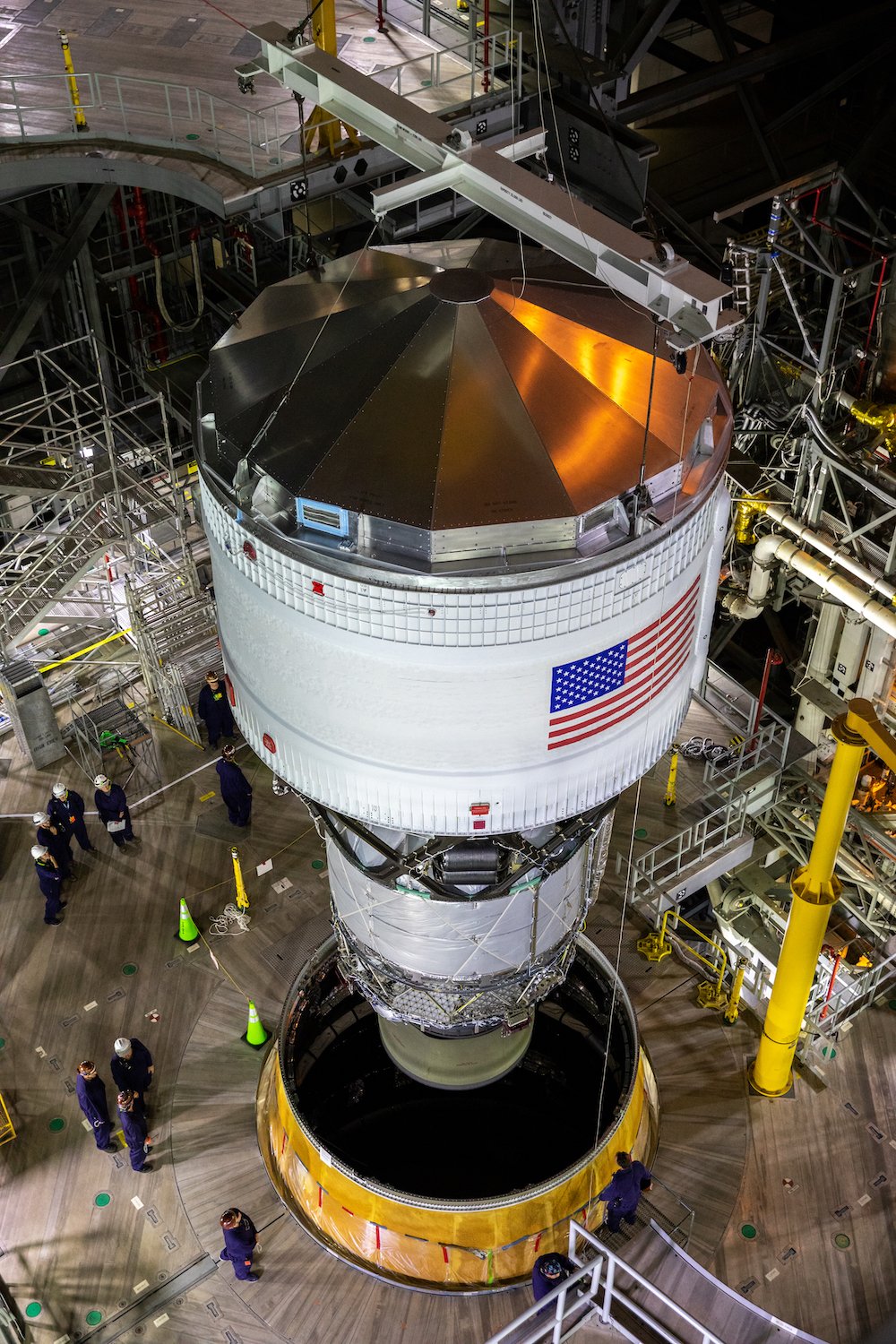 ICPS was then transported to the VAB’s transfer aisle to be hooked up with the lifting crane. Standing more than 45 feet tall and secured in its Vertical Transport Fixture, the ICPS was moved aboard an Elevating Platform Transporter that provided hydraulic leveling and precision positioning capabilities along the route.

This summer will be spent performing final checkouts and testing in the VAB. Some tests will be done with structural test articles for the OSA and Orion mounted on top of the flight hardware stack. This provides extra time for processing the secondary payloads in the OSA and Orion launch preparations. After the test articles are removed, the flight OSA and Orion will be added to the Artemis I stack to form the final flight vehicle. The refurbished mobile launcher will transport the rocket more than four miles to pad 39B for a Wet Dress Rehearsal fueling exercise and countdown demonstration.

SLS with ICPS is the most powerful rocket ever developed, producing 8.8 million pounds of thrust during liftoff to loft a vehicle weighing nearly six million pounds. Launches to the Moon will be nearly 1,000 times farther than where the International Space Station resides in low-Earth orbit.

"ULA is honored to partner with Boeing and contribute hardware and expertise in the exciting adventure to send astronauts on exploration missions in America's return to the Moon as part of NASA's Artemis program," said Gary Wentz, ULA vice president Government and Commercial Programs.

ULA and our heritage rockets have a long history supporting exploration of the Moon and research deemed critical to human missions. Since the company's creation in 2006, we have launched three important NASA investigations.