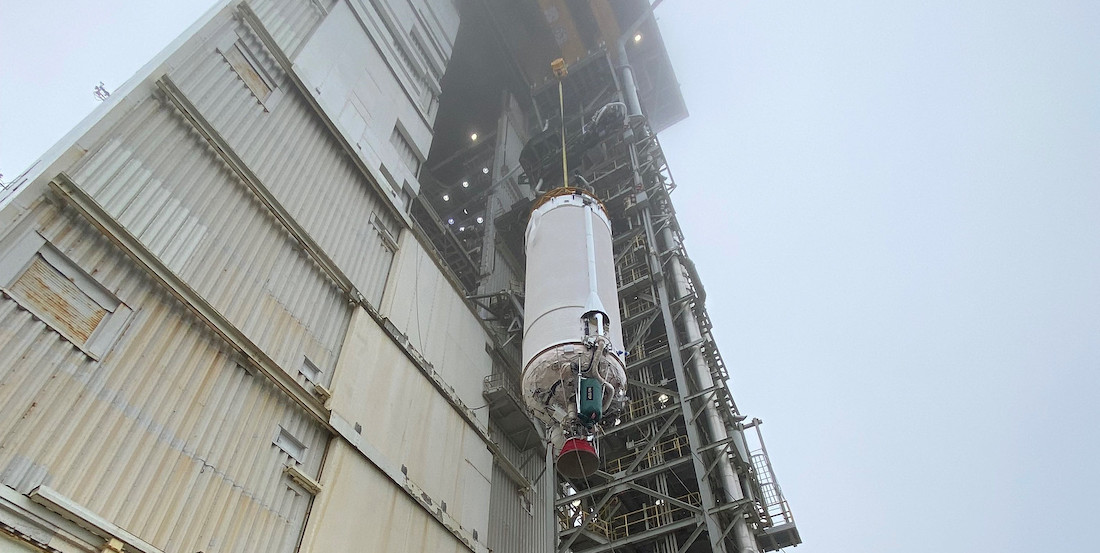 The Centaur upper stage is hoisted into the mobile service at SLC-3 to launch JPSS-2 and LOFTID. Photo by United Launch Alliance

United Launch Alliance (ULA) is configuring an Atlas V 401 rocket atop Space Launch Complex (SLC)-3 at Vandenberg Space Force Base in California to carry the next polar-orbiting weather satellite into space for NOAA and NASA and perform an innovative re-entry experiment.

A single burn of the Centaur upper stage will place the Joint Polar Satellite System (JPSS)-2 weather observatory into a sun-synchronous, polar low-Earth orbit for deployment. Two subsequent burns by Centaur will lower the altitude and put NASA's Low-Earth Orbit Flight Test of an Inflatable Decelerator (LOFTID) on a re-entry trajectory.

Several milestones for the upcoming launch were recently achieved when ULA placed the Atlas and Centaur stages on the pad. The SLC-3 site is a classic launch complex with a fixed umbilical tower and Mobile Service Tower (MST).

Launch Vehicle on Stand (LVOS) occurred on Sept. 28 when the 107-foot-long (33-meter) Atlas V first stage was raised vertically by the overhead MST crane and maneuvered it onto the Fixed Launch Platform (FLP).

After adding the interstage adapter the next day, the Centaur upper stage was hoisted into position atop the first stage on Sept. 30. The lower portion of the payload fairing, called the boattail, was installed on Oct. 4 to complete the basic buildup of the launch vehicle.

This will be the 41st flight of the Atlas V 401 rocket, the most flown of all the configurations. This rocket, designated AV-098, features a four-meter-diameter Extended Payload Fairing (EPF), no solid rocket boosters and a single RL10C-1 engine on the Centaur.

The encapsulated spacecraft will be delivered to SLC-3 for mounting atop the launch vehicle in the weeks leading up to launch.

The advanced JPSS system improves the accuracy and timeliness of numerical weather prediction models to enhance forecasting. JPSS-2 will provide global observations that serve as the backbone of both short- and long-term weather forecasting and climate record-keeping.

LOFTID will demonstrate an inflatable aeroshell, or heat shield, as a way to deliver heavy payloads safely through the atmosphere to the surface of Earth or other planets. ULA is exploring the incorporation of such technology in reusability plans for our new Vulcan Centaur rocket.

Vulcan's use of the Sensible Modular Autonomous Return Technology (SMART) design focuses on reusing the most value part of the rocket -- its main engines. SMART will recover both engines in an economical method that reduces launch costs while not penalizing payloads by reserving first stage performance to propulsively land the stage.

The JPSS-2 launch will be the 301st and final Atlas mission from Vandenberg dating back to 1959. Like the recent launch of the last Delta IV Heavy from the West Coast, these final flights are part of ULA's transition to Vulcan.

SLC-3 will undergo modifications following the JPSS-2 launch to ready the site to provide the accommodations needed to support the larger Vulcan rocket at Vandenberg.