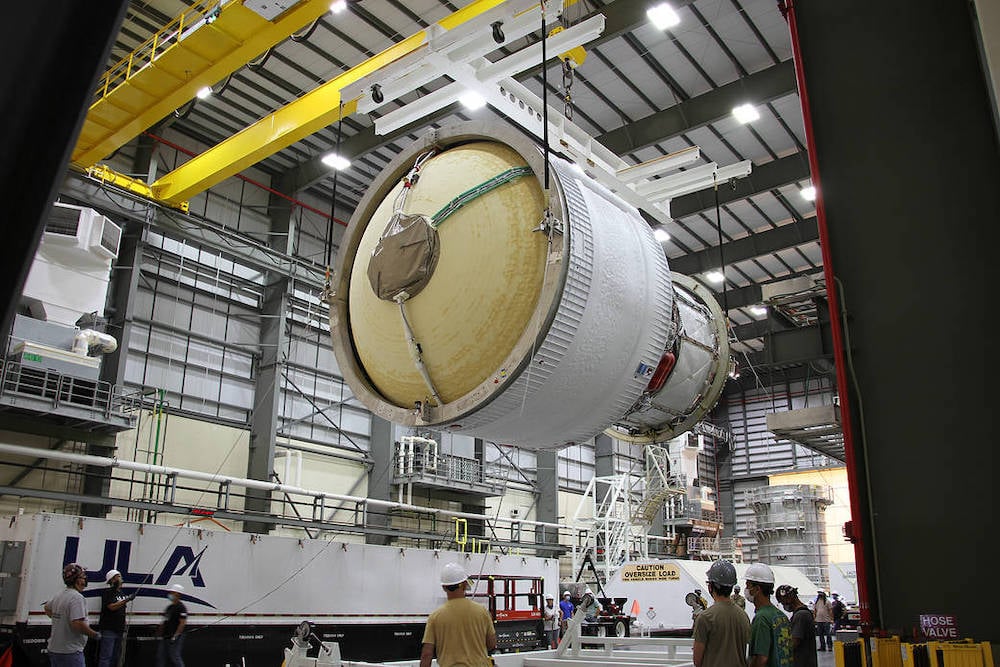 The stage made the trip tucked inside a protective shipping container.

"ULA is honored to contribute to NASA's Artemis program by supplying the Interim Cryogenic Propulsion Stage for the initial flights of the Space Launch System (SLS). ICPS-2 will place Orion on the required trajectory for its crewed test flight around the Moon," said Gary Wentz, ULA vice president Government and Commercial Programs.

ICPS is built by ULA under a collaborative partnership with Boeing to serve as the upper stage of SLS, the world's most powerful rocket. As the name implies, it is the interim upper stage solution for the first three launches until the Boeing-made Exploration Upper Stage (EUS) is ready.

The ICPS is based on the five-meter-diameter version of ULA's Delta Cryogenic Second Stage (DCSS) that has flown 24 times on Delta IV missions since 2004 with 100 percent mission success.

ICPS features a slightly larger liquid hydrogen tank as compared to the Delta IV second stage, as well as electrical and mechanical interfaces specific to attaching and supporting the Orion spacecraft, and a second hydrazine bottle for additional attitude control propellant.

The ICPS for Artemis II also includes an Emergency Detection System (EDS) and other hardware changes specific to human safety.

ICPS-1 for the uncrewed inaugural flight of SLS was stacked atop its rocket earlier this month at Kennedy Space Center's Vehicle Assembly Building. That stage delivers the big push for Orion to begin its three-week test flight to the Moon on NASA's Artemis I mission.

The ICPS-2 stage on Artemis II provides the boost for the Orion capsule and its four astronauts to reach the desired high Earth orbit stretching 68,000 miles (109,435 km) above the planet before separating from the Moon-bound spacecraft.