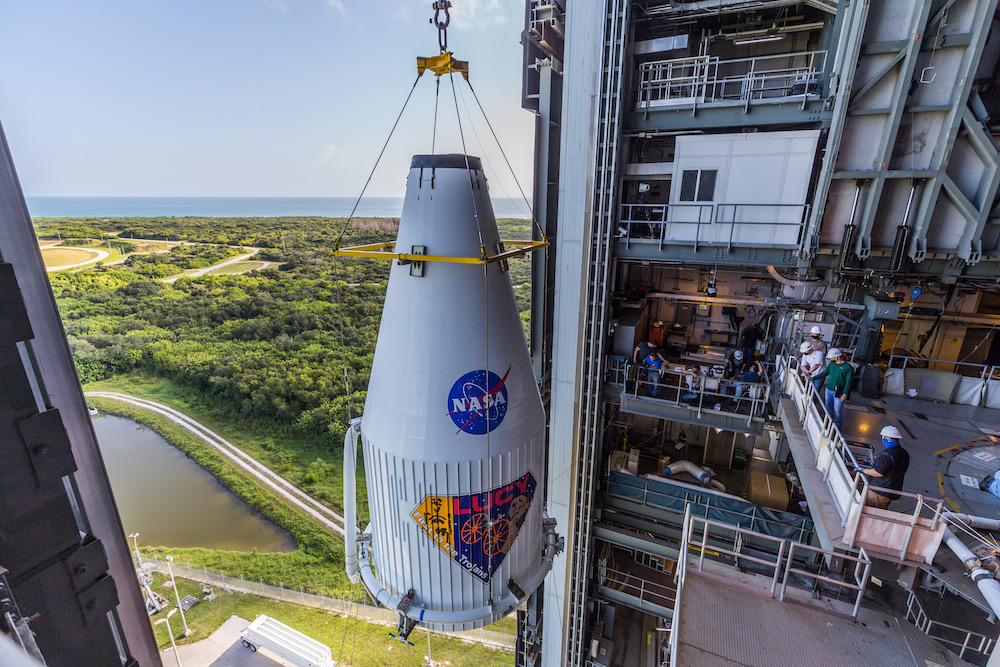 A heavy-duty crane is attached to the Lucy payload and hoists the precious cargo aboard the Atlas V launch vehicle at the Vertical Integration Facility (VIF). Photo by United Launch Alliance

NASA's Lucy spacecraft was placed atop the United Launch Alliance (ULA) Atlas V 401 rocket today in preparation to embark on a voyage to uncharted worlds in the Trojan asteroid swarms that orbit near Jupiter.

Encapsulated in the Atlas V rocket's metallic payload fairing and riding aboard ULA's motored payload transporter, Lucy was transported overnight from the Astrotech processing facility in nearby Titusville, across the river and onto Cape Canaveral Space Force Station to Space Launch Complex (SLC)-41. 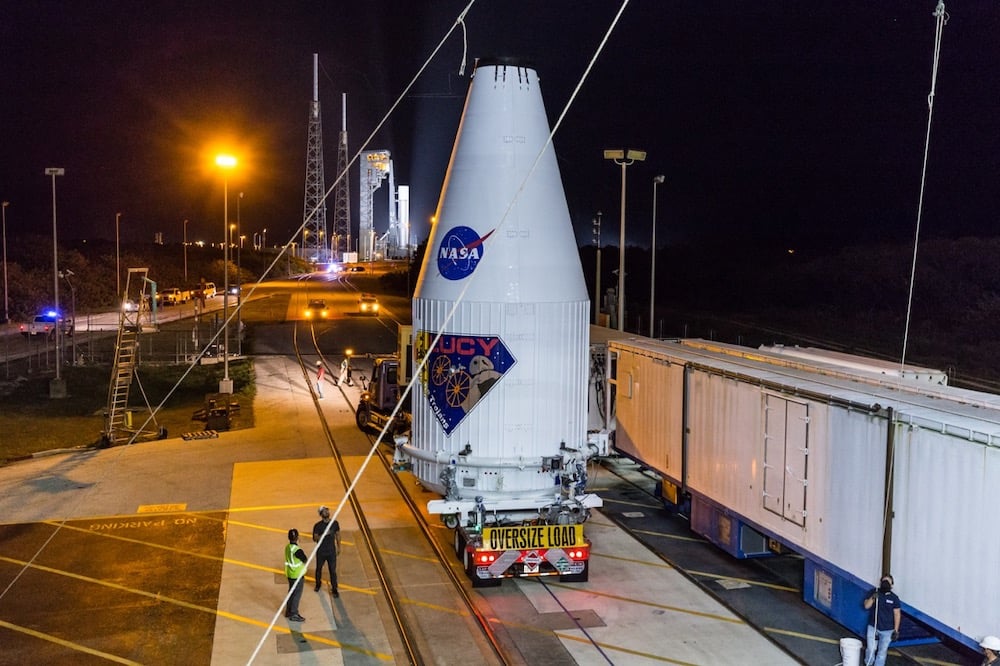 Lucy was parked at doorway to the Vertical Integration Facility (VIF) where its Atlas V rocket is assembled aboard the Mobile Launch Platform (MLP). The heavy-duty crane was attached to the payload and deftly hoisted the precious cargo aboard the launch vehicle.

The launch is targeted for Oct. 16 at 5:34 a.m. EDT (0934 UTC), when the three-week interplanetary launch window opens. There will be opportunities for Lucy to depart Earth through Nov. 7.

Atlas V will employ RAAN steering, a feature that makes the daily launch windows longer to ensure Lucy is able to make its tight trajectory to the Trojans.

It will be ULA's 146th mission, our 37th for NASA's Launch Services Program and second in less than three weeks following the successful Landsat 9 observatory launch on Sept. 27. The Atlas V rocket will be performing its 89th launch and the 40th in the 401 configuration with the four-meter-diameter payload fairing, no solid rocket boosters and a single RL10C-1 engine on the Centaur upper stage.

This also will mark the 100th launch from SLC-41, the historic pad originally constructed by the U.S. Air Force in the 1960s for the Titan rocket program. There were 27 launches of the Titan family between 1965 and 1999, including NASA's two Viking missions in 1975 that landed on Mars and both Voyager probes in 1977 to the outer solar system.

Lucy is the 73rd Atlas V launch from this pad since 2002, following such notable missions as the New Horizons spacecraft to Pluto, four missions to Mars and Juno currently orbiting Jupiter. 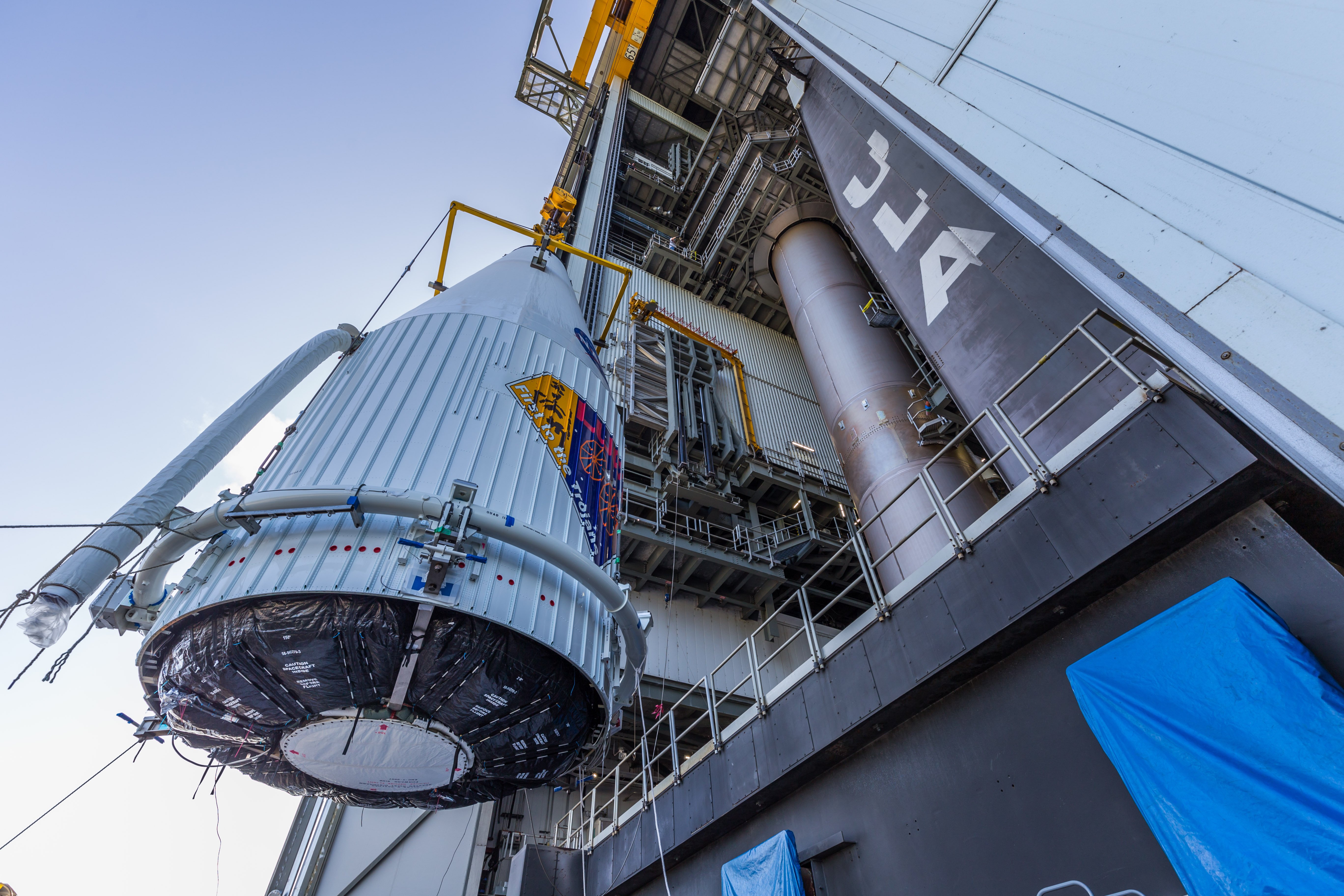 Following staging due east of the Cape, the Centaur will ignite its liquid hydrogen-fed engine for a 9-minute firing that delivers the spacecraft into a preliminary orbit. The payload fairing is jettisoned shortly after the upper stage ignition.

After coasting over the equator and Africa for 25 minutes, Centaur restarts its main engine for the Earth escape burn. This 6-minute firing over the Indian Ocean accelerates the 3,300-pound (1,500-kg) Lucy to a velocity of nearly 27,179 mph (43,741 kmph).

Lucy will be deployed from the Atlas V rocket high above Australia on its Earth departure trajectory nearly an hour after liftoff, embarking on a 12-year mission spanning 4 billion miles (6.4 billion km) of space to explore 8 asteroids. No single spacecraft in history has visited so many destinations, all independently orbiting the Sun, in a single mission.

On its way to the Trojan asteroids, the spacecraft will fly by the main belt asteroid Donaldjohanson on April 20, 2025. The object is named for the American paleoanthropologist who co-discovered the fossilized skeleton of an early hominin that scientists named Lucy and from which this mission gets its name. 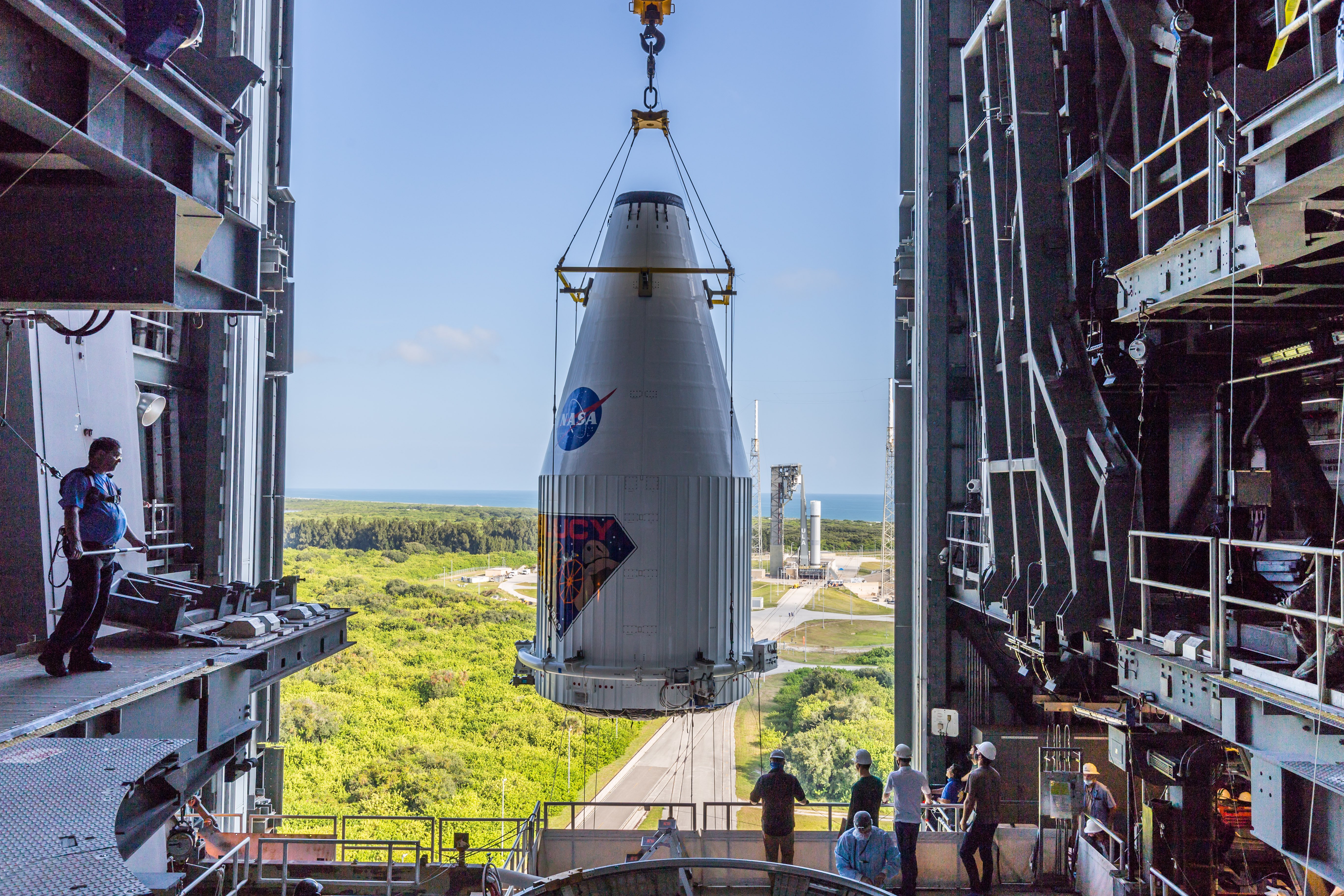 Lucy will fly by the Trojan asteroids Eurybates and its satellite, Queta, on Aug. 12, 2027, Polymele on Sept. 15, 2027, Leucus on April 18, 2028 and Orus on Nov. 11, 2028. The spacecraft's course then takes back near the Earth for a gravity-assist maneuver to reach more Trojans, arriving on March 2, 2033 to encounter Patroclus and its near-twin binary companion Menoetius to complete the primary mission.

The Trojans are primitive asteroids are like fossils from the earliest days of our solar system that could contain the same primordial material that formed the outer planets.

Lucy will remain on a stable orbit which will enable it to visit the Trojans over and over again for many thousands, and possibly millions, of years.