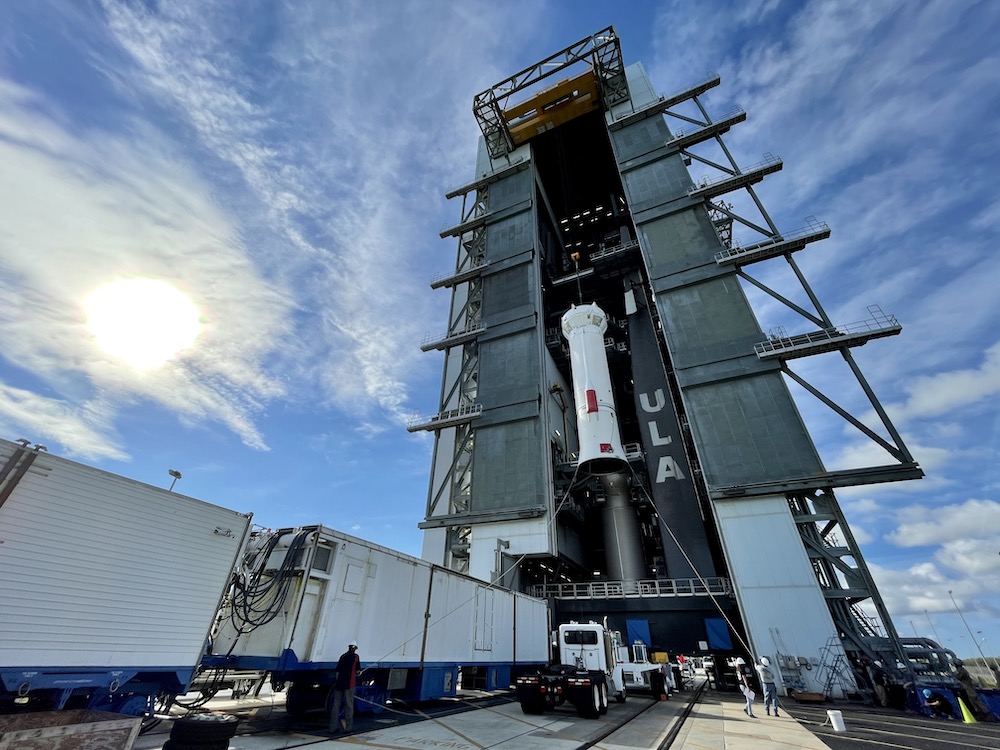 The Atlas V upper stage for NASA's Lucy mission is hoisted atop the first stage at the Vertical Integration Facility (VIF). Photo by United Launch Alliance

United Launch Alliance (ULA) technicians are ready to begin pre-flight testing of the Atlas V rocket that will launch NASA's Lucy spacecraft on an unprecedented tour of eight asteroids to explore the diversity of the small, primordial worlds.

Assembly of the two-stage rocket was completed this morning inside the Vertical Integration Facility (VIF) at Cape Canaveral Space Force Station, Fla.

The upper stage element of the launch vehicle, known as the OVI for Offsite Vertical Integration, was delivered to the VIF and hoisted atop the waiting first stage. The OVI consists of the interstage, Centaur upper stage and the boattail, which will connect to the payload fairing later in the stacking process. 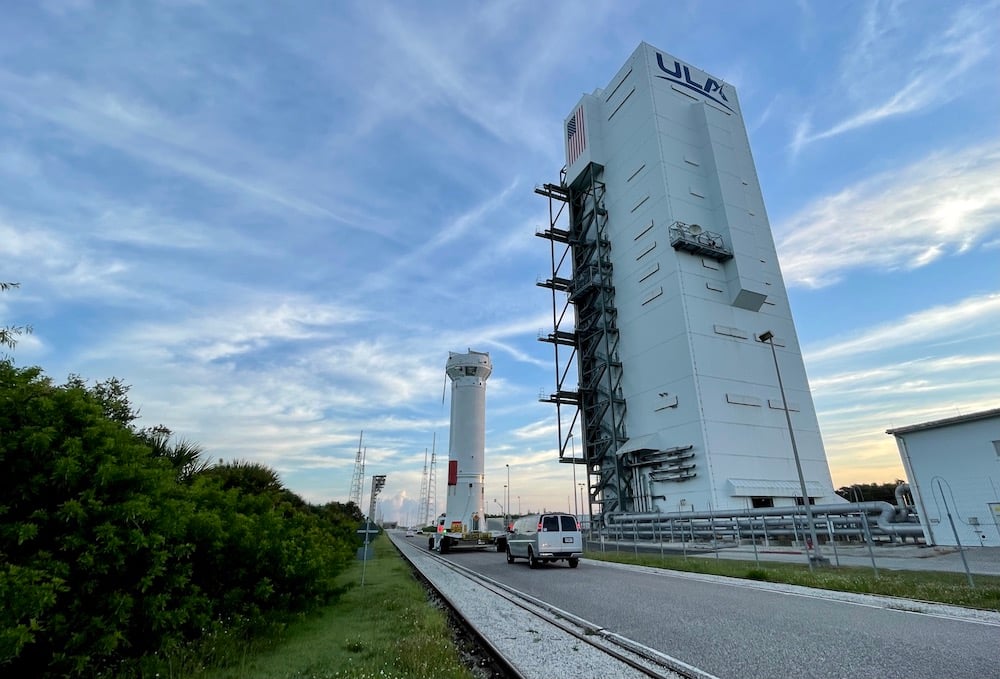 Completing the basic buildup of the rocket allows the extensive checkout procedures to commence. The vehicle will be powered up, its avionics, engine steering and subsystems tested, and a simulated flight sequence executed.

Then, the Mobile Launch Platform (MLP) will transport the Atlas V from the VIF to Space Launch Complex (SLC)-41 to undergo a Wet Dress Rehearsal (WDR) to fuel both stages and conduct a complete day-of-launch exercise.

WDRs are milestones meant to mitigate any issues before the actual launch day arrives, enabling engineers to evaluate how the rocket and ground systems behave to uncover any issues that might need further examination.

Lucy has a three-week launch window to begin the first space mission to explore a population of objects known as the Jupiter Trojan asteroids. These asteroids are remnants of the early solar system and now orbit in two swarms, trapped in stable orbits that lead in front of and trail behind Jupiter in its path around the Sun.

The 12-year, four-billion-mile (6.4-billion-km) tour will fly by one main belt asteroid and seven Trojan asteroids, the most objects ever visited by a single spacecraft.

The mission is named after the fossilized skeleton of a pre-human ancestor found in Ethiopia in 1974 and named "Lucy" by the team of paleontologists who discovered it. The Lucy fossil provided insights into humanity's evolution and the Lucy spacecraft promises to deepen our understanding of planetary origins.

Launching Lucy is the responsibility entrusted to the Atlas V 401 rocket by NASA's Launch Services Program. Atlas V has successfully launched spacecraft to Mars on five different occasions, plus research investigations to the Sun, the Moon, Jupiter, the Asteroid Bennu and Pluto.

For this launch, ULA will use the first stage originally slated to launch the Boeing CST-100 Starliner spacecraft on the Orbital Flight Test (OFT)-2 mission earlier this summer. 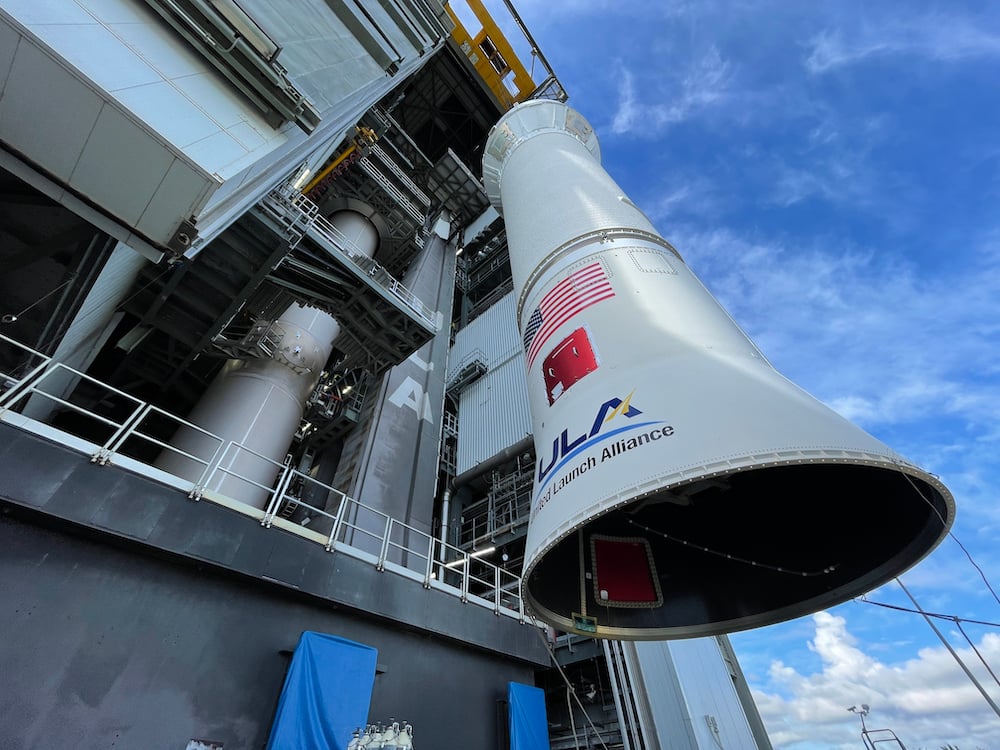 The Dual Engine Centaur, interstage and two solid rocket boosters were removed from the OFT-2 Atlas V first stage, allowing the stage to be converted for use in the Lucy launch. It has remained vertical aboard the MLP at the VIF during the mission transition.

The Lucy launch features a Single Engine Centaur, fitted with an RL10C-1 engine, and uses no solid rocket boosters.

The spacecraft will be encapsulated inside the Atlas V aluminum Large Payload Fairing (LPF) that is 39 feet (12 m) in length and 13.8 feet (4m) in diameter. Once Lucy is mounted aboard the Atlas V, the completed rocket will stand 188 feet (57.3 m) tall at launch.