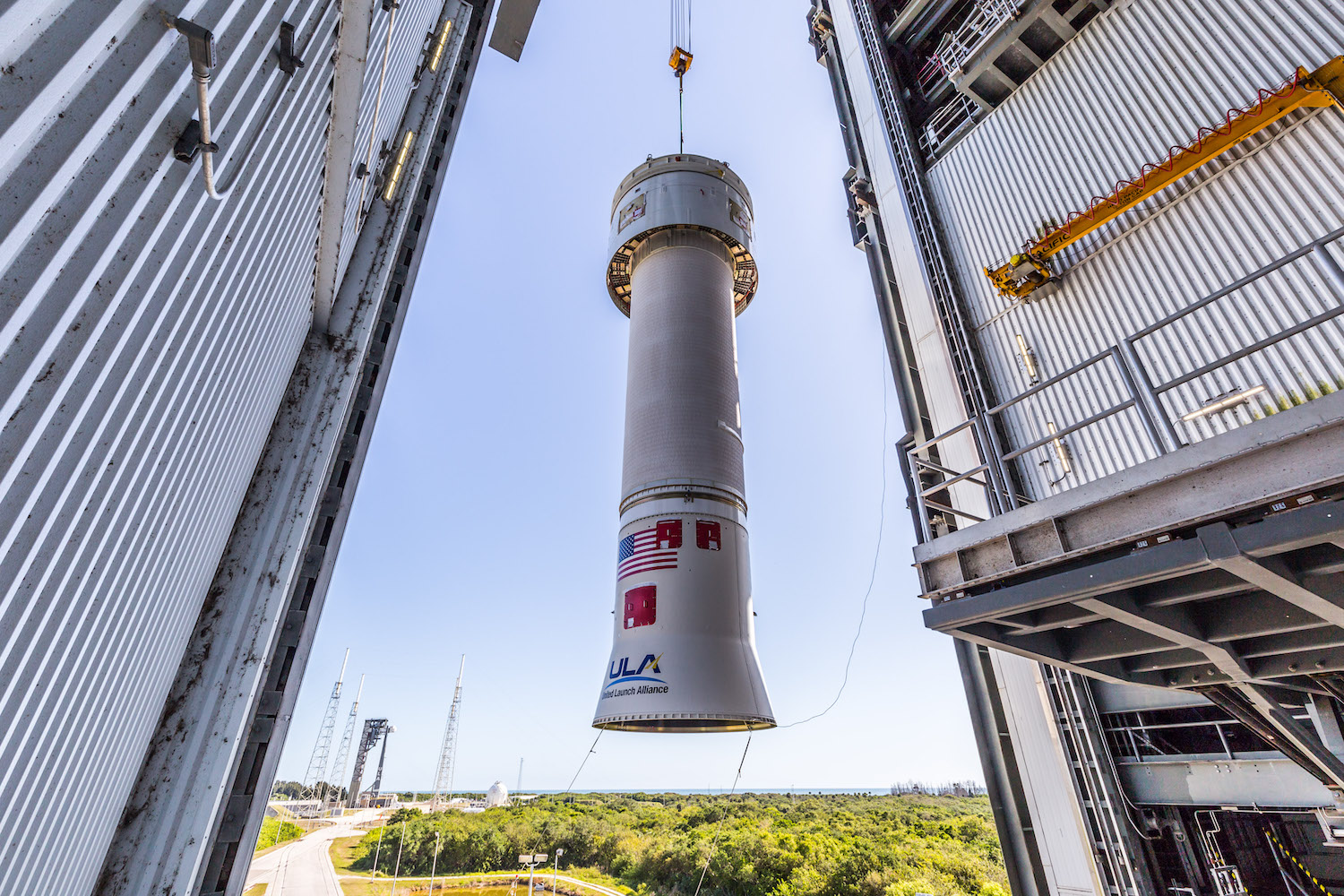 Centaur is hoisted into the Vertical Integration Facility. Photo by United Launch Alliance

The Atlas V rocket for United Launch Alliance's (ULA's) 150th mission now stands aboard the mobile launch platform (MLP) inside the Vertical Integration Facility (VIF) to begin pre-flight testing ahead of its liftoff on May 19.

The uniquely configured rocket marks the second flight of Atlas V's N22 variant featuring two solid rocket boosters (SRBs), two RL10 engines on the Centaur upper stage and a Launch Vehicle Adapter that connects the payload to the rocket without the use of a fairing.

The mission will launch Boeing's CST-100 Starliner spacecraft on the second Orbital Flight Test (OFT-2) as part of NASA's Commercial Crew Program. OFT-2 will perform an end-to-end demonstration of the full Starliner mission profile to the International Space Station, testing capabilities of the system from pre-launch to docking and undocking to landing and recovery.

Atlas V will launch Starliner on 1.6 million pounds of thrust at the exact moment the space station's orbital plane crosses over the Space Launch Complex-41 pad. The N22 configuration provides the necessary performance to deliver Starliner to the desired trajectory en route to the station.

Integration of the rocket elements began on April 20 when the first stage was brought to the VIF and hoisted aboard the MLP. The VIF serves as ULA's 30-story-tall vertical assembly building for the Atlas V and new Vulcan Centaur rockets.

The first day of stacking work used two cranes to grapple both ends of the 107-foot-long stage so that it could be lifted free from its carrier. Next, the aft portion was secured in a special dolly that rides rail tracks, allowing the rocket to be rotated from horizontal to upright by the overhead crane while also the rear inched closer to the VIF.

Once vertical, the aft structure was disengaged and the crane holding the forward end of the rocket slowly and carefully hoisted the stage into the VIF and positioned it aboard the MLP. This achieved the Launch Vehicle on Stand (LVOS), a milestone that officially begins the launch campaign and signals another mission is right around the corner.

The twin SRBs were attached to opposite sides of the stage on April 22 and April 25. Manufactured by Aerojet Rocketdyne, the AJ-60 boosters will provide nearly half of the energy at liftoff to power the million-pound rocket and Starliner spacecraft into the sky. 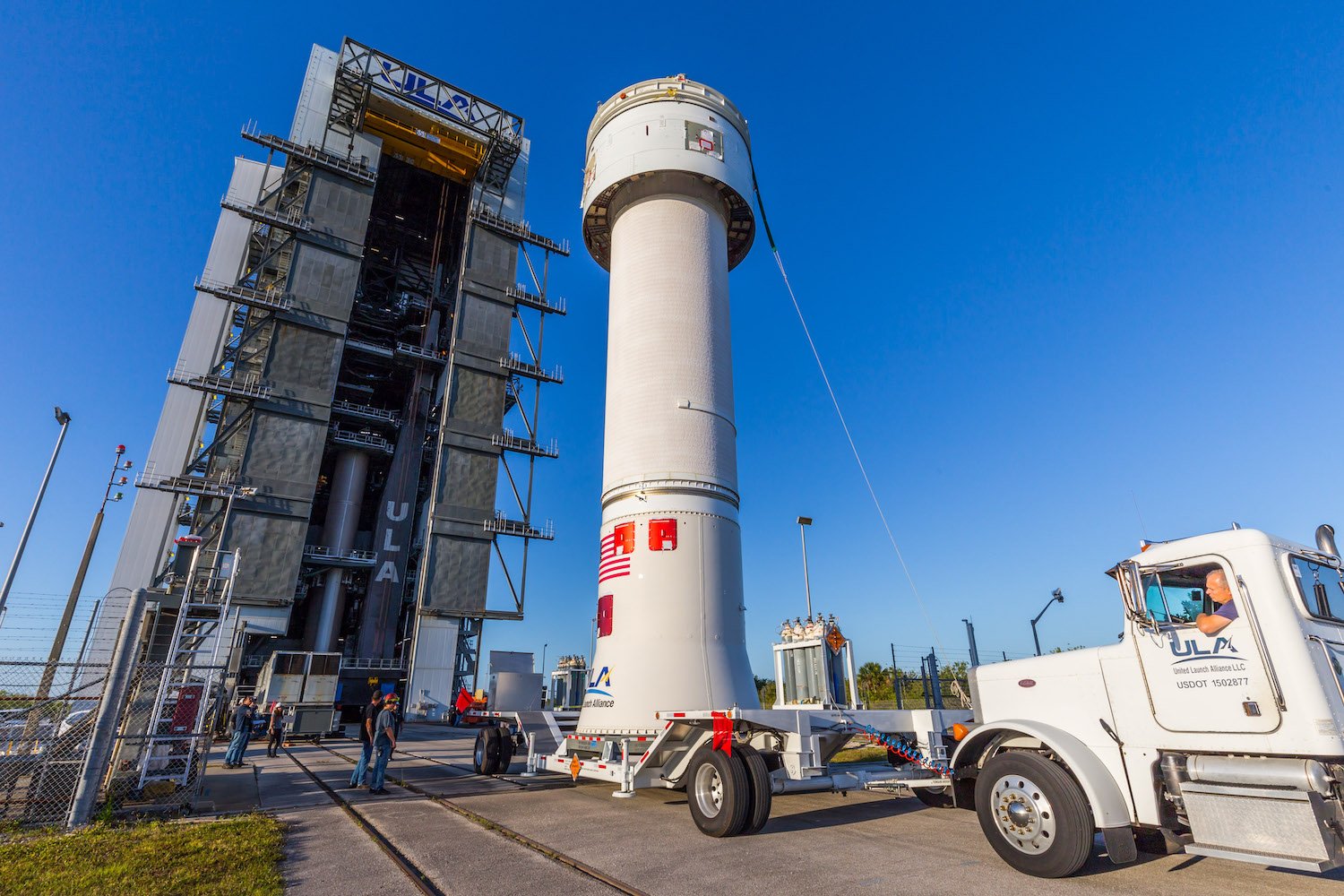 This morning, the Offsite Vertical Integration (OVI) structure, which consists of the interstage, Dual Engine Centaur upper stage and Launch Vehicle Adapter, was lifted atop the first stage to finish the initial buildup of the vehicle. Centaur will produce 44,000 pounds of thrust from its two RL10A-4-2 cryogenic engines to accelerate Starliner to the prescribed flight path.

To date, there have been 263 flights of the venerable Centaur upper stage since 1962 and 167 of those were Dual Engine Centaurs used by both Atlas and Titan rockets.

Activities to verify Atlas V is ready to launch are planned over the next few weeks, including powering up the rocket, checking the flight control systems on the Atlas and Centaur stages, performing engine steering profiles and running the Combined Systems Test.

The 172-foot-tall rocket will be completed when the Starliner is mounted aboard the Atlas V in early May. A ULA payload transporter moves the capsule from Boeing's Commercial Crew and Cargo Processing Facility at NASA's Kennedy Space Center to the nearby VIF for attachment.