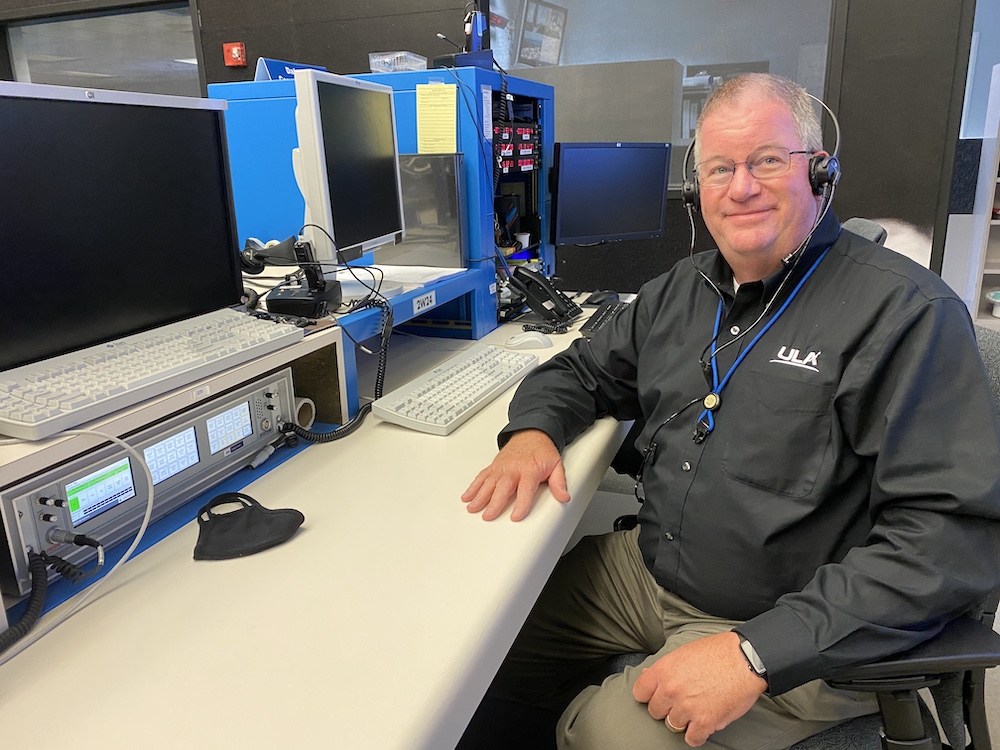 On console for the very first Delta II rocket launch on Valentine’s Day 1989 and the final Delta II in 2018, Huff is the quintessential launch professional with deep knowledge and expertise that our customers rely upon to get their missions safely into space.

Born in Parsippany, New Jersey and an aerospace engineering graduate from Penn State, Huff always knew he wanted to work in the space industry.

"I graduated college in 1987 and immediately started work in Huntington Beach, CA for McDonnell Douglas. I was hired in as part of the staffing up of the Delta II program and started in the system performance group, moving shortly thereafter to the guidance and navigation team to train prior to moving to Florida to pursue my true passion of working in launch operations," Huff recalls.

Once at the Florida launch site in 1988, Huff became the flight mechanics advisor, a position today known as the flight control engineer. From there, he became the manager of ground electrical engineering for launch operations, then the manager of the electrical engineering department, and then the senior manager and chief engineer for launch operations, all supporting the Delta II program.

"I moved to the Delta IV program when they combined what was the engineering and operations departments into a single organization and become the leader of operations/systems engineering (OSE)," Huff said.

"My current role as the OSE is for all recurring launches of Atlas V and Delta IV," he said.

"To become a launch director, you need to have a strong breadth of knowledge of the launch vehicle, the ground systems, the launch processes, as well as the customer processes and protocols. In my case, having moved up through various positions within launch operations, much of this came via my training throughout my career," Huff said.

"Additionally, I sat with our current launch directors, and went through the various products and processes with them to build on the existing knowledge I have from being on console during launches for the past 30+ years. After that, I was able to shadow current launch directors for several launch flows, including the Integrated crew exercises, the mission dress rehearsals, and launches, prior to now sitting in the 'front seat' as launch director for SBIRS GEO Flight 5."

That seat during the countdown and launch will be in the Mission Director's Center overlooking the launch control room at the Atlas Spaceflight Operations Center, located about four miles from the Space Launch Complex-41 pad where the Atlas V will be fueled for liftoff.

"The primary responsibility of the launch director is being the ULA interface to the mission management team led by the Space Force's mission director. The ULA launch director works closely with the mission director as a team to maintain overall situational awareness of the countdown -- critical assets, launch vehicle and Spacecraft health, major milestones, weather, constraints and remaining launch window -- to ensure team readiness to support the targeted launch time," Huff said.

Huff says he has too many lasting memories to count from his career so far, including being a part of the launch teams that sent numerous planetary and scientific missions across the solar system, plus "all the amazing people I have worked with and learned from over the years."

"Aside from my first year out of college, I have spent my career supporting launches at the launch sites. I have had the pleasure of working on and launching the Delta, Delta II, Delta III, Delta IV, and Atlas V vehicles so far," Huff said.

"Fun fact, I have never seen any launch of a Delta rocket from outside at any time in my career. If there was a launch where I was, I have always been in the Launch Control Center on a console."