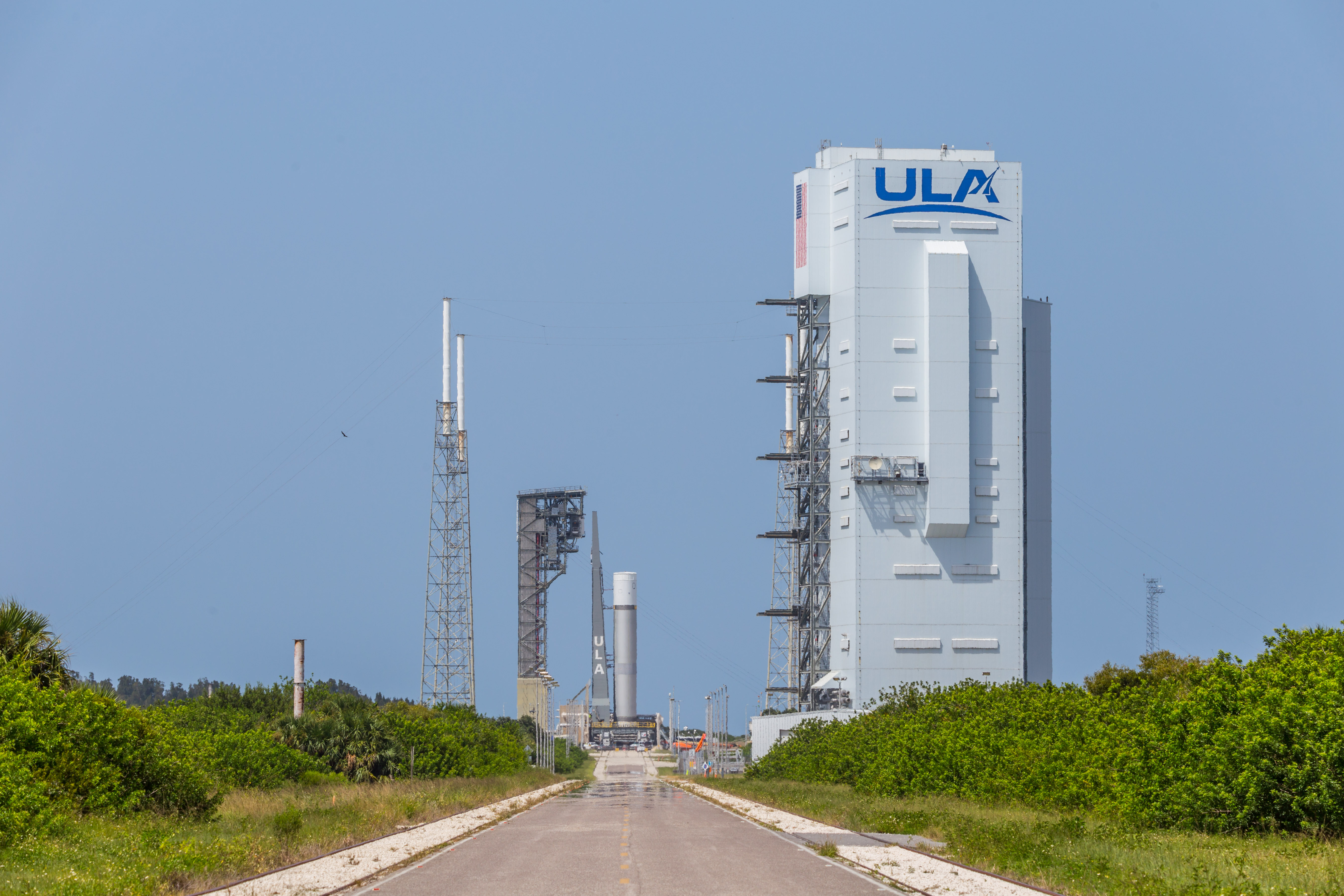 The Vulcan Centaur pathfinder rocket is ready to begin a new phase of testing at Space Launch Complex-41. Photo by United Launch Alliance

Pathfinder operations using a flight-configuration Vulcan Centaur core stage at Cape Canaveral Space Force Station are transitioning to Space Launch Complex (SLC)-41 for a series of fueling tests in the coming weeks to systematically validate launch pad infrastructure with the rocket, evaluate countdown procedures and train the launch team in advance of the inaugural Vulcan mission.

The Pathfinder Tanking Test (PTT) booster was transferred 2.7 miles (4.3 km) from the Spaceflight Processing Operations Center (SPOC) to the pad today for the start of the countdown rehearsals and fuel-loading trials that will culminate in a comprehensive exercise mimicking the steps to prepare a Vulcan first stage on launch day.

PTT is a Vulcan booster that will fly to space on a later mission. It is fitted with two development BE-4 engines, which were extensively hot fired and will be replaced with flight engines prior to launch.

Pathfinding activities earlier this year with the PTT booster successfully demonstrated transporting the 17.7-foot-diameter, 110-foot-long (5.4-meter-diameter, 33.5-meter-long) core stage from the United Launch Alliance (ULA) production factory in Decatur, Ala., to Cape Canaveral, Fla., aboard the R/S RocketShip vessel. Vulcan's size is too large for road or air transportation, making RocketShip ideally suited to send the stages to the coastal launch sites.

A significant milestone followed on Feb. 15 when the stage was hoisted into the Vertical Integration Facility and positioned aboard the Vulcan Launch Platform (VLP). The Launch Vehicle on Stand (LVOS) event used processes and procedures evolved from time-proven Atlas V operations at the VIF.

After attaching a 19-foot-long (6-meter) Interstage Adapter (ISA) and a protective top cover onto the stage, the VLP moved the PTT rocket along the rail tracks that connect the VIF to the SPOC. This relocation kicked off an extensive program of fit checks of the SPOC, evaluations of ground support systems in the facility and first article testing of the Vulcan core.

This week, ULA leadership and engineering teams held a test readiness review of the rocket hardware, pad systems, procedures and crew. The meeting authorized the pathfinder testing to proceed at the launch pad where three major operations are planned over the next few weeks:

A comprehensive test to load both LNG and liquid oxygen into the stage following the same steps and timeline as launch day.

"The dual-commodity tanking test will show the thermal characteristics of the booster and engines and validate our assumptions for tanking timelines. It also allows us to characterize and calibrate the propellant flow rates through our new fill/drain and topping valves and systems," said Dillon Rice, ULA's Vulcan Centaur launch conductor.

All of the tanking tests will utilize some of the significant modifications made to SLC-41 that have transformed the site into a dual-use pad to seamlessly handle both Atlas V and Vulcan Centaur manifests simultaneously. The work includes a newly installed LNG storage area featuring three reservoirs and upgrades made to the booster liquid oxygen transfer lines.

On each test day, the launch pad will be prepared by ground technicians before the countdown clock reaches T-minus 3 hours. Once all is confirmed in readiness, ULA Launch Director Lou Mangieri will declare the "go" for the countdown to proceed into cryogenic tanking operations.

The first two tanking tests are planned to count down to T-minus 5 minutes and holding, collect the thermal data as needed, perform specialized tests planned for each propellant system and then move into the detanking operations to drain the cryogenic propellant from the rocket.

For the combined LNG and liquid oxygen loading day, the countdown will enter a simplified version of the terminal count that covers the final few minutes before T-minus 0 seconds.

"In a nutshell, the 'terminal count lite' as we are calling it, will close the vent valves and bring the booster propellant tanks to their flight pressures.  This also validates our analysis assumptions and predictions. Once the tanks are pressurized, we will remain at flight pressure until we hit T-0," Rice said.

"We will then demonstrate recycle procedures such as venting tank pressures from flight to standby levels and resume propellant topping."

The day concludes with detanking and safing the rocket stage.

The Vulcan Centaur program is steadily moving towards its maiden flight in 2022. It combines the best of today's Atlas V and Delta IV rocket families with the latest technology advancements. The result is a single launch system that provides higher performance and greater affordability while continuing to deliver unmatched reliability and precision.