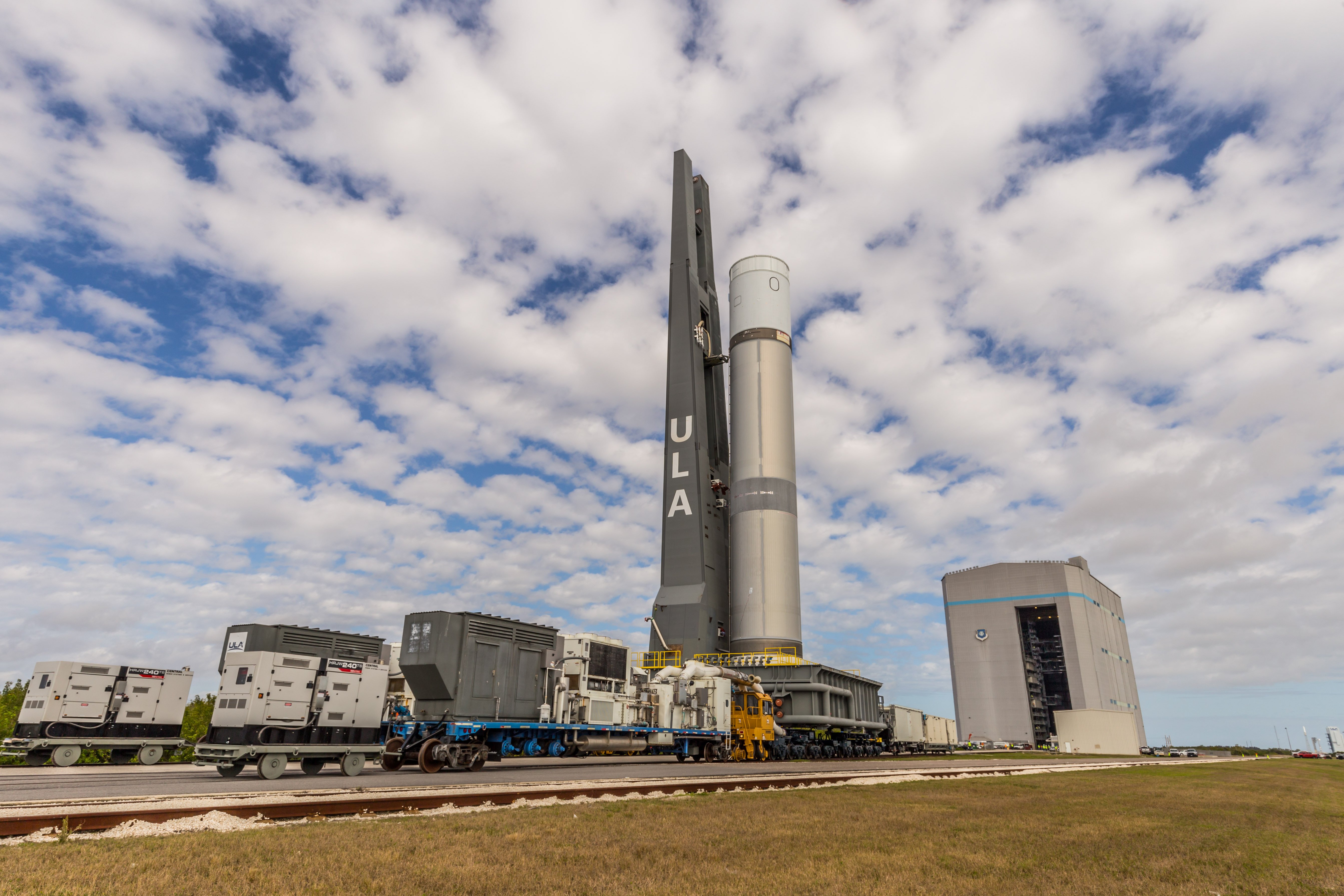 The VLP with the PTT booster nears the SPOC. Photo by United Launch Alliance 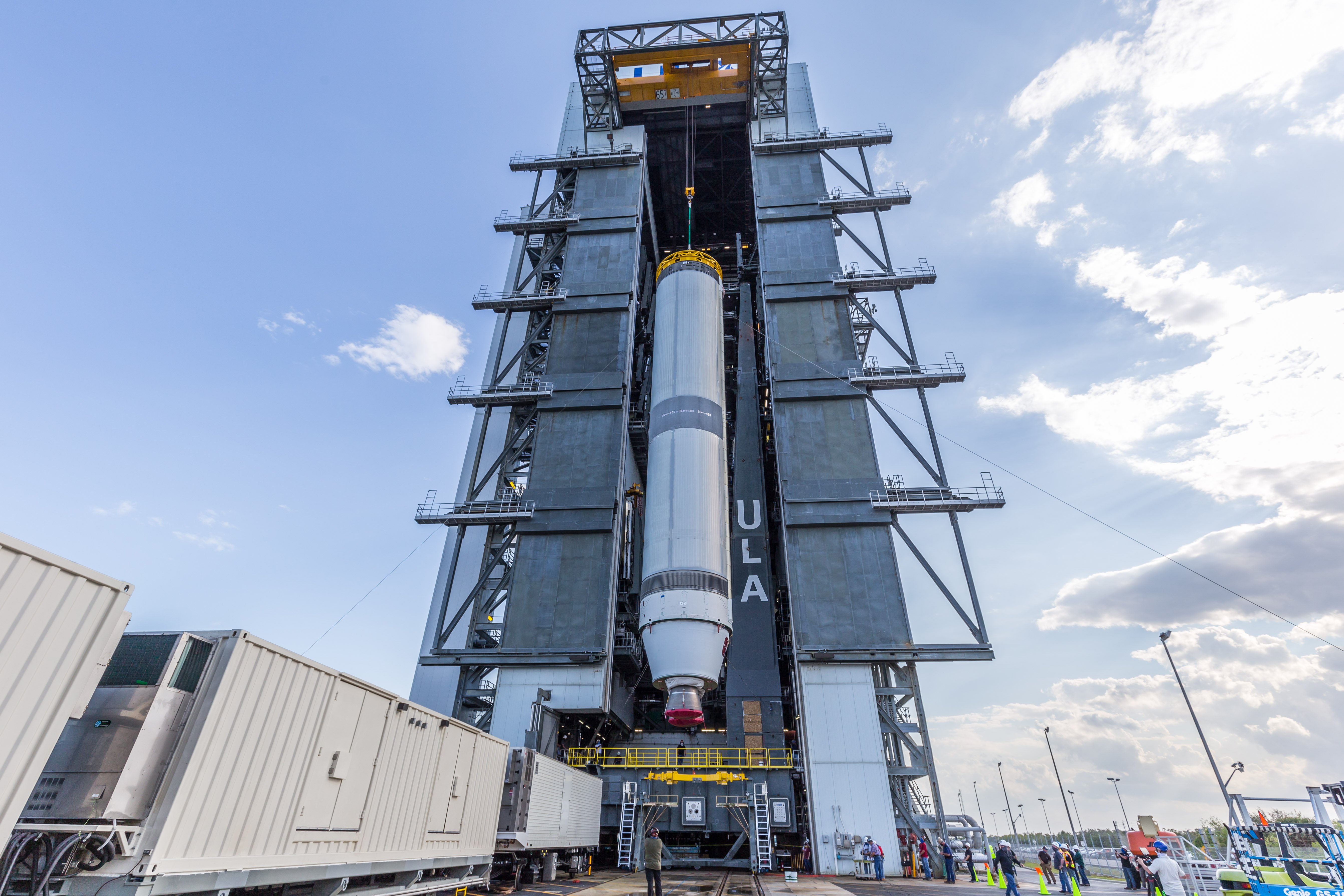 At ULA's Vertical Integration Facility (VIF) on Monday, Feb. 15, the Vulcan program achieved a significant milestone when the Pathfinder Tanking Test (PTT) booster was hoisted into place aboard the Vulcan Launch Platform (VLP). PTT is a flight configuration core stage that will complete validations of the launch site and later be used on a Vulcan launch into space.

Using processes and procedures evolved from time-proven Atlas V operations, Monday's activities were known as Launch Vehicle on Stand (LVOS). Technicians attached lifting cranes to position the PTT stage aboard a special handling fixture used to pivot rockets from horizontal to vertical. Slowly hoisting the forward end of the rocket upward by the VIF's overhead crane, the booster was rotated upright and ready to be raised through the VIF doorway and anchored to its VLP.

Measuring 17.7 feet in diameter and 110 feet in length (5.4-meter-diameter, 33.5-meter-long), the rocket is the largest stage ever moved in the VIF, well exceeding Atlas V stages that have used the assembly building for nearly 20 years.

Ground teams completed the build up of the pathfinder vehicle on Thursday, Feb. 18 by hoisting the 19-foot-long (6-meter) Interstage Adapter (ISA) and a protective top cover onto the stage. This configuration will support the pathfinder as it progresses through testing.

On Monday, Feb. 22, the VLP transported the booster along the rail tracks that connect the VIF to the Spaceflight Operations Center (SPOC) located about two miles away. This relocation of the pathfinder allows extended first article testing to continue in the SPOC while the VIF supports the Atlas V launch manifest.

The renamed SPOC, originally a heritage Titan IVB rocket facility constructed in the 1990s, has been renovated to support the Vulcan program as an auxiliary vertical processing facility and storage bay at Cape Canaveral Space Force Station.

The pathfinder booster will be used for fit checks of the SPOC and its newly fashioned access platforms, plus evaluations of ground support systems in the facility. Later, functional testing of the rocket will be performed to ensure readiness to undergo rehearsals and the first fuel-loading exercises at the Space Launch Complex-41 pad this spring.

Vulcan combines the best of today's Atlas V and Delta IV rocket families with the latest technology advancements. The result is a single launch system that provides higher performance and greater affordability while continuing to deliver our unmatched reliability and precision.

The innovative technology within Vulcan transforms the future of launch by meeting the challenging requirements now demanded by U.S. national security space launch and its expanding spectrum of missions that are essential to the country's defense. Satisfying those specifications means Vulcan is well suited for commercial and civil markets, including launching dual-manifested payloads and missions across the solar system.

The next-generation rocket already has a healthy backlog of nearly 30 launches booked, starting with the inaugural mission later this year to launch Astrobotic's Peregrine commercial lunar lander to the moon.

#ICYMI: The #VulcanCentaur pathfinder booster arrived in Cape Canaveral, Florida, completed LVOS activities and then moved from the VIF to the SPOC for testing to continue while the VIF supports the #AtlasV launch manifest. #CountdownToVulcan pic.twitter.com/sdhE7qdB3Q