The encapsulated JPSS-2 and LOFTID payloads are hoisted atop Atlas V. Photo by United Launch Alliance

A new weather observatory that will track storms across the globe as it orbits from pole to pole and a technology demonstrator developing a new way to safely bring large payloads through the atmosphere are mounted aboard a United Launch Alliance (ULA) Atlas V rocket for liftoff Nov. 1.

NOAA's Joint Polar Satellite System (JPSS)-2 satellite will operate in a sun-synchronous low-Earth polar orbit to collect weather data and contribute to climate monitoring. NASA's Low-Earth Orbit Flight Test of an Inflatable Decelerator (LOFTID) will demonstrate an inflatable aeroshell as a heat shield to return large cargoes to Earth or the surface of other planets. 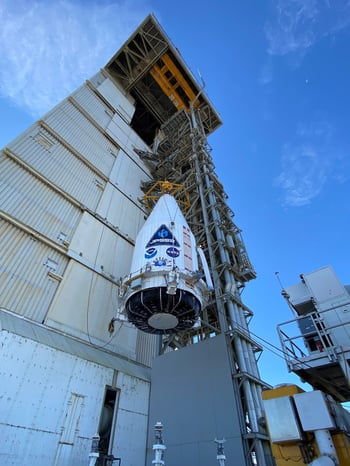 JPSS-2 will survey the entire planet twice per day to collect weather observations and information on Earth's climate. Data includes imagery, atmospheric temperature and humidity profiles, land and ocean surface temperature measurements, and readings on ozone levels and solar radiation from the planet. The observations are ingested into numerical computer models to generate weather forecasts and track climate trends.

The advanced JPSS constellation, which also includes the NOAA/NASA Suomi National Polar-orbiting Partnership (Suomi NPP) and NOAA-20 (originally known as JPSS-1) satellites launched by ULA on Delta II rockets in 2011 and 2017, respectively, improves the accuracy and timeliness of weather prediction models to enhance forecasting. JPSS-2 will join NOAA-20 and SNPP to provide global observations that serve as the backbone of both short- and long-term weather forecasting.

NOAA's National Weather Service says 85 percent of data needed to run numerical weather forecast models comes from polar-orbiting weather satellites like JPSS-2. Improving the accuracy of weather forecasts enables decision-makers, emergency managers and the public to prepare and pre-position resources that are necessary steps to save lives and protect property.

JPSS-2 will be renamed NOAA-21 once it reaches its polar orbit as part of the operational weather fleet. 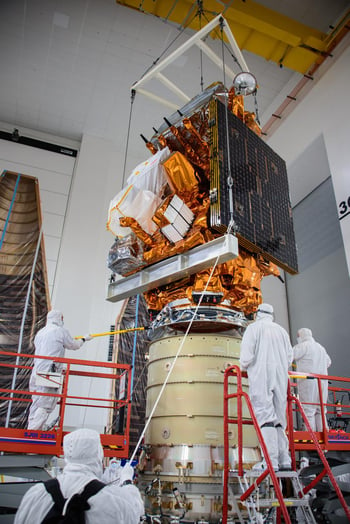 LOFTID is the orbital flight test of Hypersonic Inflatable Aerodynamic Decelerator (HIAD) technology, which one day could help land humans on Mars and play an integral part of ULA's reusability roadmap to recover the main engines of our future Vulcan Centaur rocket.

HIAD technology is larger than traditional aeroshells, creating more drag and starting the deceleration process in the upper reaches of the atmosphere. That translates into allowing not only heavier payloads, but also landing at higher altitudes.

Once JPSS-2 is separated from the Atlas V rocket, the Centaur upper stage will perform two additional engine burns to change the orbit and then set LOFTID on a re-entry trajectory. The aeroshell will inflate and then release from the Centaur to descend into the atmosphere, decelerating from hypersonic, more than 25 times faster than the speed of sound, down to subsonic flight, less than 609 miles per hour.

Throughout the flight, a real-time beacon periodically transmits limited data while sensors and cameras acquire a more comprehensive data set that is stored on an internal data recorder and an ejectable data recorder that is jettisoned and recovered after re-entry.

LOFTID will deploy a parachute to allow a soft splash down and will be retrieved from the Pacific Ocean with support from ULA and the Hawaii Resource Group.

LOFTID represents a key milestone in preparing for reusability in ULA's Vulcan launch system. From the beginning, the Sensible Modular Autonomous Return Technology (SMART) has been part of Vulcan that focuses on reusing the most value part of the rocket -- its main engines.

Vulcan is purpose-built to meet the challenging requirements demanded by U.S. national security space launches while being flexible and affordable. SMART will recover both main engines for reuse in an economical method that reduces launch costs while not penalizing payloads by reserving first stage performance to propulsively land the stage.

LOFTID is named in honor of Bernard Kutter, manager of advanced programs at ULA, who passed away in August 2020. He was not only an advocate for more lower cost access to space by using the technology on Vulcan, but also landing large payloads on Mars required for crewed missions.

This will be the 97th flight of the Atlas V rocket, the 41st in the 401 configuration and its 23rd and last launch for NASA's LSP. It also marks the 301st and final Atlas from Vandenberg as ULA transitions SLC-3 to support Vulcan.