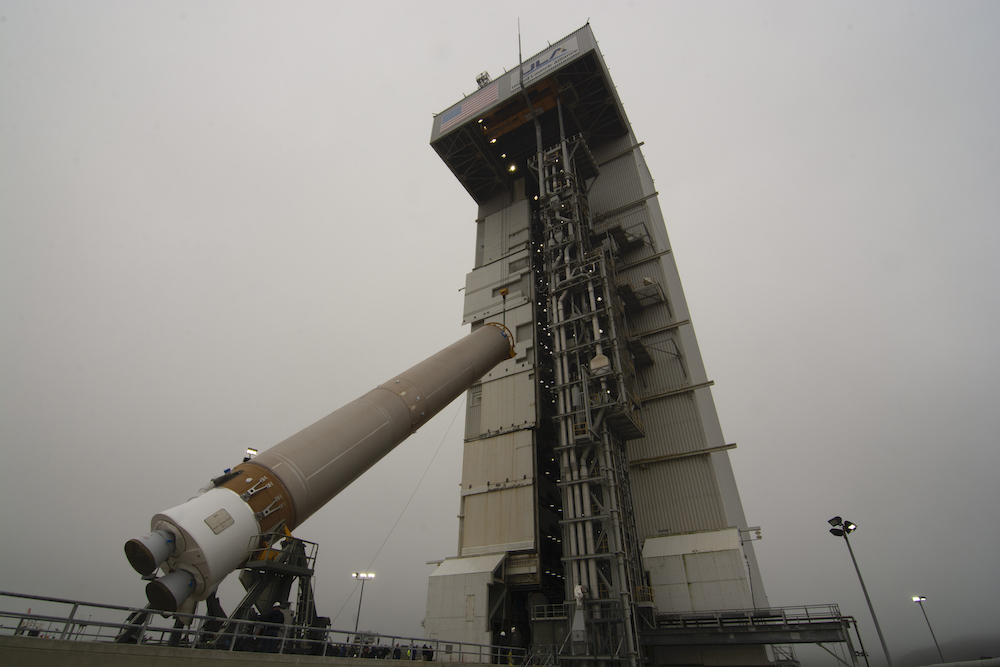 The United Launch Alliance (ULA) Atlas V first stage is hoisted into the MST at SLC-3 at Vandenberg Space Force Base, Calif. Photo by NASA

The 300th Atlas rocket launch to originate from Vandenberg Space Force Base in California is being readied to carry the Landsat 9 observatory into space on a mission to continue the half-century uninterrupted, unparalleled data record compiled by Landsat satellites monitoring the Earth's ever changing environment.

Several milestones for the upcoming launch were achieved last week when ULA placed the Atlas and Centaur stages on the pad at Space Launch Complex (SLC)-3. The site is a classic launch pad with a fixed umbilical tower and Mobile Service Tower (MST). 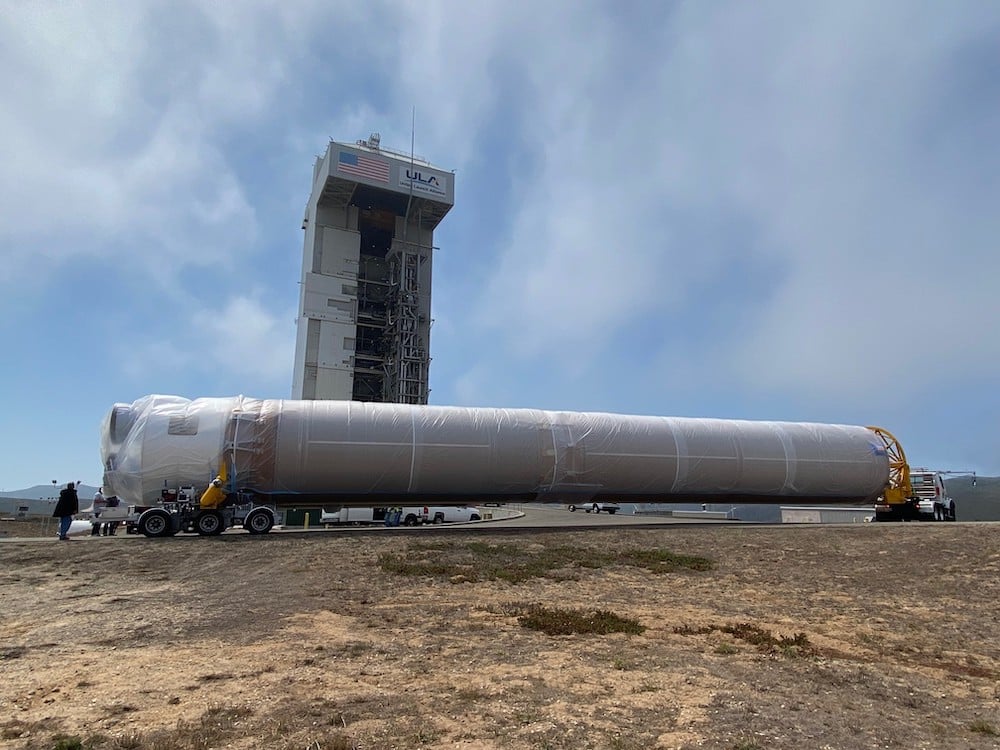 Launch Vehicle on Stand (LVOS) occurred on July 13 when the 107-foot-long (33-meter) Atlas V first stage was raised vertically by the overhead MST crane and maneuvered it onto the Fixed Launch Platform (FLP).

After adding the interstage adapter the next day, the Centaur upper stage was hoisted into position atop the first stage on July 15. The lower portion of the payload fairing, called the boattail, was installed on July 17 to complete the basic buildup of the launch vehicle.

This will be the 39th flight of the Atlas V 401 rocket, the most flown of all the configurations. It uses a four-meter-diameter payload fairing, no solid rocket boosters and a single RL10 engine on the Centaur. It is the same configuration that launched the previous Landsat mission 8 years ago. 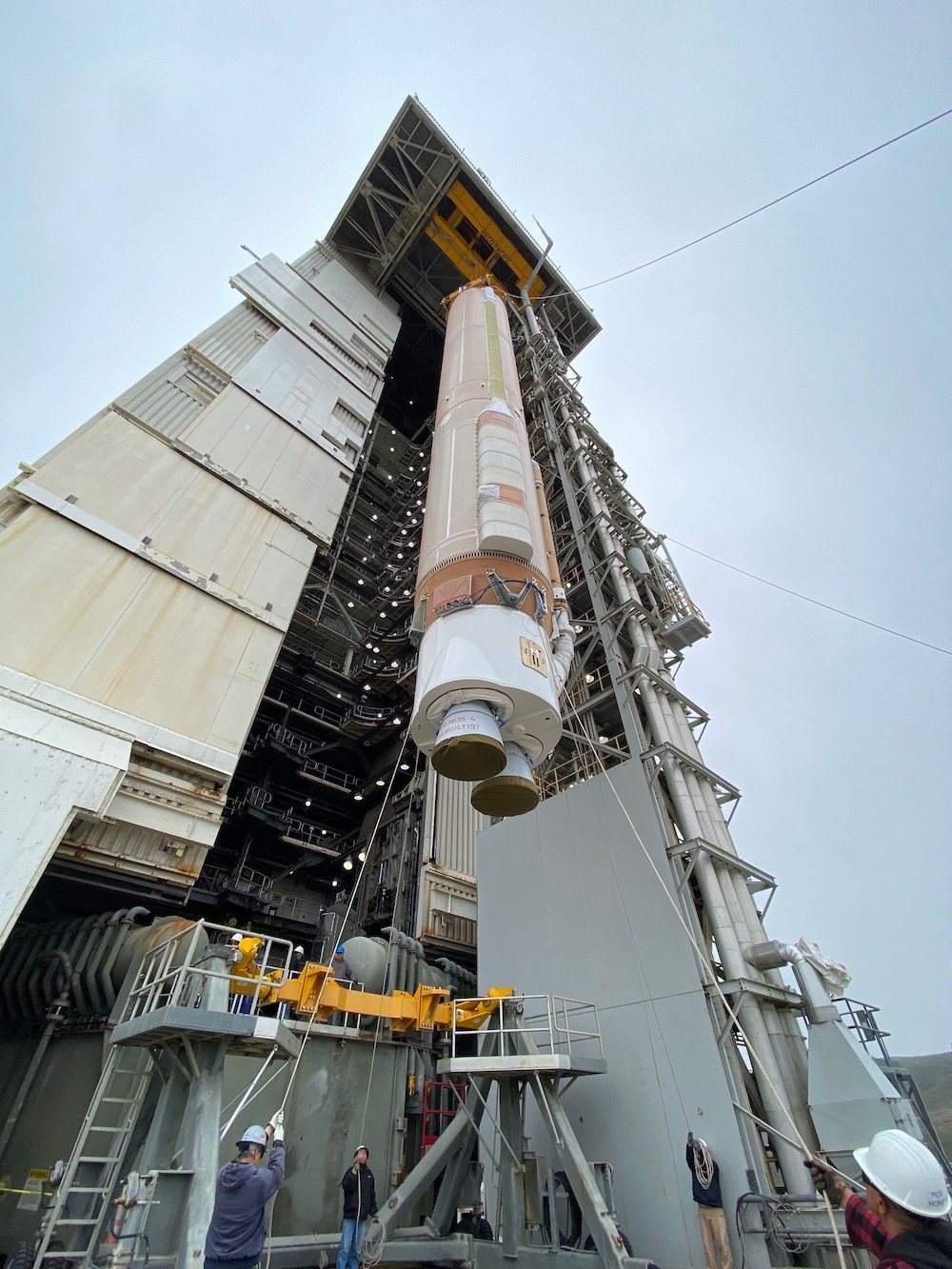 The launch site and Atlas V will undergo a practice countdown and fueling exercise next month, known as a Wet Dress Rehearsal (WDR). That will be followed by delivering the encapsulated Landsat 9 spacecraft to SLC-3 for mounting atop the launch vehicle.

Landsat, the centerpiece of NASA's Earth Science program, began accumulating the longest continuous record of Earth's surface as seen from space when the first craft was launched by a Delta rocket in 1972. Landsat's freely available imagery of the planet shows Earth's changes from urban expansion, deforestation and natural disasters.

ULA Atlas rockets and its heritage Delta vehicles have launched every successful Landsat mission over the past 49 years.

An Atlas V rocket launched the most recent spacecraft, the Landsat Data Continuity Mission (LDCM), in 2013. The next spacecraft, Landsat 9, will continue the legacy of Landsat and capture more than 700 scenes of Earth per day.

Landsat 9 is a partnership between NASA and the U.S. Geological Survey. The launch is managed by NASA’s Launch Services Program based at the agency’s Kennedy Space Center in Florida.

Vandenberg has hosted 299 Atlas launches to date, the most recent being the departure of NASA's InSight spacecraft to Mars in 2018, the only interplanetary launch ever made from the U.S. West Coast.