The inflated LOFTID Re-entry Vehicle separates from the Centaur. Illustration by NASA

In the kickoff to the reusability roadmap for the United Launch Alliance (ULA) Vulcan Centaur rocket, the flight of an inflatable heat shield at a relevant scale will be demonstrated as a secondary payload on the next Atlas V rocket launch.

The Bernard Kutter Low-Earth Orbit Flight Test of an Inflatable Decelerator (LOFTID) demonstration will be launched Nov. 1 from Vandenberg Space Force Base in California.

LOFTID demonstrates a specific type of Hypersonic Inflatable Aerodynamic Decelerator (HIAD) technology, which one day could help land humans on Mars and play an integral part of ULA's reusability plan to recover the main engines of our future Vulcan rocket.

HIAD technology allows larger than traditional aeroshells, limited by the payload fairing size, creating more drag and starting the deceleration process in the upper reaches of the atmosphere. That translates into allowing not only heavier payloads, but also landing at higher altitudes. Employing an inflatable aeroshell instead of rigid ones used in the past enables packaging in tight confines for launch before expanding to large diameters needed for use in engine recovery.

The LOFTID test is joint effort between ULA and NASA's Langley Research Center.

"LOFTID is technology demonstration to show how an inflatable aeroshell can re-enter the atmosphere, slow down, and survive. It can be used to bring in heavy payloads in places with an atmosphere, like Earth and Mars," said James Cusin, an operations engineer in ULA's Advanced Programs.

"We can use this technology in reusability for Vulcan."

During the demonstration, the Centaur upper stage will achieve a sun-synchronous orbit and deploy the Joint Polar Satellite System (JPSS)-2 weather observatory for NOAA and NASA within the first half-hour of the ascent. LOFTID rides below JPSS-2 in the payload stack and is packed within a bag 7.4 feet (2.3 meters) tall and 4.3 feet (1.3 meters) in diameter.

Centaur will execute another burn to reach an elliptical transfer orbit that lowers the altitude on the other side of the orbit. A subsequent third burn places LOFTID on its desired re-entry flight path to test the heat shield against the intense conditions of atmospheric re-entry.

After achieving the ballistic re-entry trajectory, Centaur re-orients, the ULA-designed launch canister encasing LOFTID in its stowed configuration is ejected and the upper stage issues a signal to "wake up" LOFTID to begin the inflation process using gaseous nitrogen. Centaur will do a spinup maneuver to give LOFTID spin-stabilization before releasing the Re-entry Vehicle about 75 minutes after liftoff.

Measuring an inflated 19.7 feet (6.0 meters) in diameter and 5.9 feet (1.79 meters) tall, the Re-entry Vehicle plunges through the atmosphere over the Pacific Ocean, its flexible heat shield seeing temperatures in excess of 4,000 degrees F (2,200 degrees C). This Flexible Thermal Protection System (FTPS) is made of a fabric outer layer withstanding the surface temperatures, insulation layer that reduce the heat transmission to the inflated structure, and a gas barrier that prevents any hot gas from flowing through.

Throughout the flight, a real-time beacon periodically transmits limited data to orbiting commercial communications satellites while sensors and cameras acquire a more comprehensive data set that is stored on internal data recorders. A softball-sized ejectable recorder is jettisoned before splashdown and to be recovered as a redundant means of recovering the results.

LOFTID is equipped with a parachute that will slow the system before landing a couple hundred miles east of Hawaii about two hours after launch. A recovery ship staged from Hawaii will retrieve LOFTID and the data module for post-flight inspection and analysis.

High-fidelity measurements of the entry environment will be collected from heat flux gauges, thermocouples, pressure transducers, and strain sensors. This information will allow engineers to reconstruct the flight to explore the aeroheating, dynamic pressure, vehicle orientation and trajectory, and surface and interior temperatures experienced throughout the flight test.

"Recovering LOFTID and getting that data is the priority for this mission. Getting the data would deem a successful technology demonstration," Cusin said.

"All of the data we get out of the LOFTID mission will be used to help corollate models and gain a much better understanding of what the Vulcan reuse system will face." 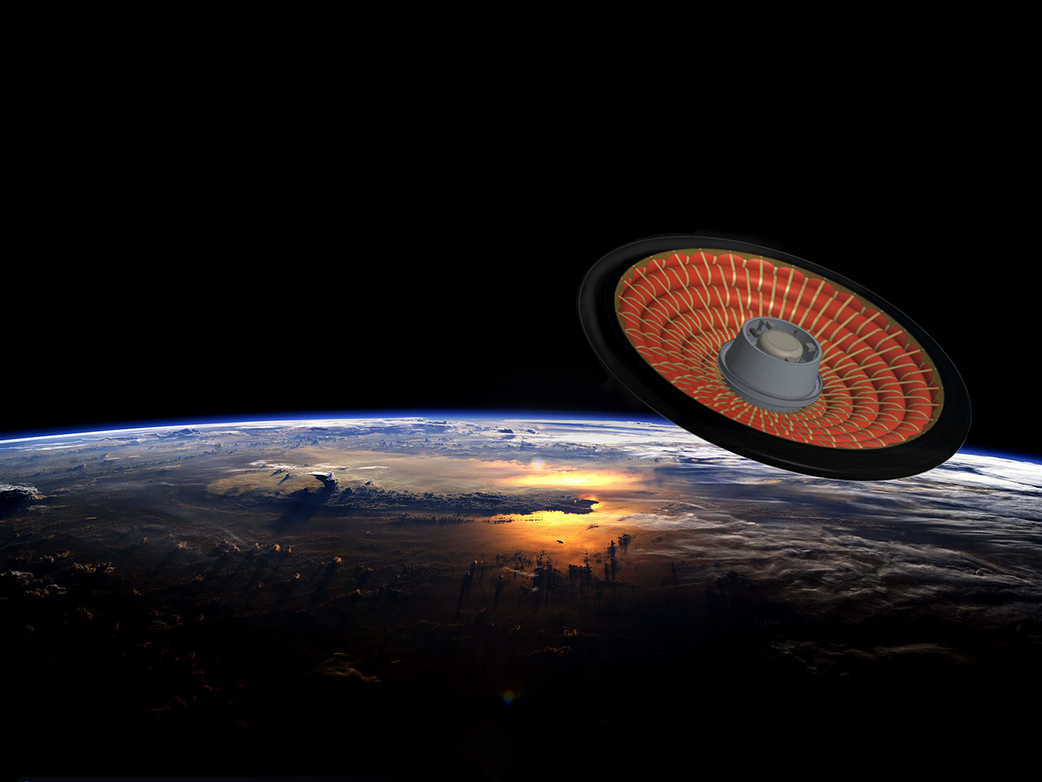 LOFTID represents a key milestone in preparing for reusability in ULA's Vulcan launch system. From the beginning, the Sensible Modular Autonomous Return Technology (SMART) has been part of Vulcan development that focuses on reusing the most valuable part of the rocket -- its main engines.

"ULA is engaged in trade studies ahead of formulating the final design decisions and conducting reviews for the SMART system," Cusin said.

SMART will see the first stage engine section separate from Vulcan, a HIAD system then inflates to protect the engines during atmospheric re-entry and a parachute slowing the descent to a safe water landing for retrieval by a pre-positioned ship. The engines are brought back to port for re-certification and plugged in to another first stage from the factory.

The engines are a quarter of a Vulcan first stage's weight and 65 percent of its cost. Recovering the engines and using them again significantly reduces the overall rocket's propulsion cost.

Vulcan is purpose-built to meet the challenging requirements demanded by U.S. national security space launches while being flexible and affordable. SMART will recover both main engines for reuse in an economical method that cuts launch costs without penalizing payloads by reserving first stage performance to propulsively land the stage.

LOFTID is named in honor of Bernard Kutter, manager of ULA's Advanced Programs, who passed away in August 2020. He was an advocate for more lower cost access to space by using the technology on Vulcan, but also saw the value in the technology for landing large payloads on Mars required for crewed missions. He was instrumental in advancing the technology and developing the plan to test the system on our Atlas V rocket.