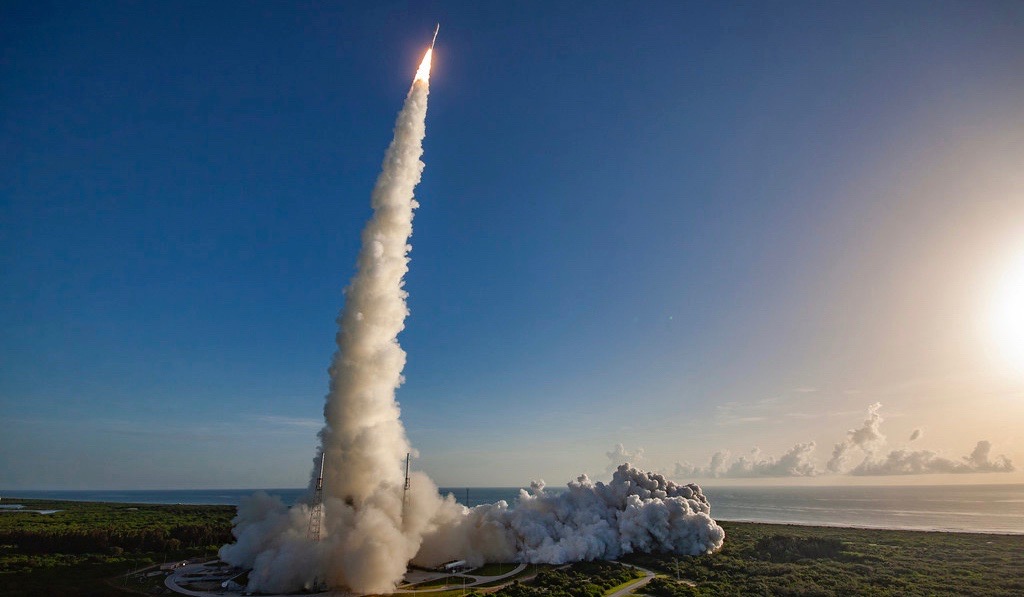 Rockets from United Launch Alliance and our heritage companies have launched every U.S. led successful mission to Mars, and the upcoming Mars 2020 project featuring the Perseverance rover and Ingenuity helicopter marks the 20th trip to the red planet.

From the early days of space exploration to today's sophisticated rovers looking for signs the neighboring planet was once habitable for life, Atlas, Delta and Titan rockets have provided the launches.

Let's look back at these 20 significant Mars mission launched by ULA and our heritage rockets, launches of the missions that have helped create the path of discovery, enabling exploration of the red planet, solar system and beyond.

1. The first successful Mars mission by the U.S. was Mariner 4, launching from Cape Canaveral aboard an Atlas LV-3 Agena-D rocket on Nov. 28, 1964. Mariner 4 performed the first successful Mars flyby on July 14, 1965 and returned 21 photos of the planet. It was one of the great successes of the early American space program by taking the first photos of another planet from space.

2.-3. Launched on Feb. 24 and March 27, 1969 aboard Atlas-Centaur rockets from Cape Canaveral, the Mariner 6 and 7 spacecraft flew by Mars just five days apart in the summer of 1969 as the first dual mission to the planet and returned nearly 200 photos.

4. The historic voyage of Mariner 9 became the first artificial satellite of Mars by entering orbit around the planet. An Atlas-Centaur successfully launched the mission on May 30, 1971, sending the spacecraft to Mars for orbit insertion on Nov. 13 to begin more than a year of studying a global dust storm, the Martian atmosphere and returning over 7,000 photos.

5.-8.The voyages of Viking 1 and Viking 2 were two-part missions to investigate the red planet and search for signs of life. Launched atop a pair of Titan IIIE-Centaur rockets on Aug. 20 and Sept. 9, 1975, both Viking missions featured an orbiter to take high-resolution images, study the Martian surface and atmosphere and a lander. Viking 1 was the first U.S. spacecraft to land on Mars on July 20, 1976 where it operated for six years at Chryse Planitia studying soil sample in a special biological laboratory. Viking 2 landed on Sept. 3, 1976 at Utopia Planitia. Neither lander discovered life, but they did find all the elements essential to life.

9. The U.S. returned to Martian exploration with the Mars Global Surveyor, launched by a Delta II rocket on Nov. 7, 1996 from Cape Canaveral. The spacecraft orbited Mars for 9 years to study the composition of the planet, map its topography and monitor weather patterns. The orbiter made a number of discoveries, including evidence of liquid water at or near the Martian surface.

10. Mars Pathfinder left Earth atop a Delta II rocket on Dec. 4, 1996 and landed the following year on July 4 to successful demonstrate a new method for delivering science instruments to the surface using an air bag landing system. The mission deployed Sojourner, the first wheeled vehicle to be used on any other planet in the solar system and served as the foundation for the Mars rovers of today.

11.  The 2001 Mars Odyssey mission has spent more time in orbit around Mars than any other spacecraft in history. A Delta II rocket launched the orbiter on April 7, 2001 to collect data on the Martian climate and geology. Findings by the mission suggest frozen water is contained in Mars' high-latitude regions.

12. Mars Exploration Rover Spirit was launched by Delta II on June 10, 2003. The rover spent six years inside Gusev Crater where it discovered Mars was once much wetter than it is today.

13. Mars Exploration Rover Opportunity, the sister to Spirit, launched on July 7, 2003 aboard a Delta II Heavy. It landed in Meridiani Planum and operated for 14 years, a lifetime that found evidence that long ago at least one area of Mars stayed wet for an extended period and that conditions could have been suitable for sustaining microbial life.

14. The Mars Reconnaissance Orbiter (MRO) was the Atlas V's first launch to Mars on Aug. 12, 2005. MRO features the HiRISE camera that produces images at resolutions never before seen in planetary exploration missions. It has studied the history of water flows on or near the planet's surface.

15. A Delta II rocket launched the Phoenix lander on Aug. 4, 2007 on a mission that verified the existence of water-ice in the Martian subsurface. The lander used a robotic arm to dig samples of the surrounding soil and dump them into onboard instruments for analysis. Phoenix discovered traces of the chemical perchlorate, a possible energy source for microbes and a potentially valuable future resource for human explorers.

16. Atlas V launched NASA's Mars Science Laboratory mission with the Curiosity rover on Nov. 26, 2011 en route to a landing at the foot of a layered mountain within the massive Gale Crater. Curiosity's scientific tools have found chemical and mineral evidence of past habitable environments on Mars, and it continues to explore the rock record from a time when Mars could have been home to microbial life.

17. The Mars Atmosphere and Volatile EvolutioN (MAVEN) mission, which launched atop an Atlas V from Cape Canaveral on Nov. 18, 2013, is the first mission devoted to understanding the Martian upper atmosphere. MAVEN is investigating three primary science questions including the structure and composition of the atmosphere and ionosphere, the current state of the upper atmosphere, the physical and chemical processes that control the atmospheric escape rate.

18.-19. NASA's Mars InSight lander mission was launched by Atlas V on May 5, 2018 to probe the inner workings of the red planet. It was the first ever Mars launch to originate from the U.S. West Coast at Vandenberg Air Force Base, California. InSight is a stationary geophysical lander on equatorial Mars that is using the planet as a perfect laboratory to study the formation and evolution of rocky planets, something not possible on Earth because plate tectonics have erased detailed evidence of the ancient past. The craft is detecting marsquakes to reveal the planet's interior structure using the lander's radio to look for subtle wobbles of planet's poles. In addition to InSight, the mission included two CubeSats which launched from dispensers mounted on the aft bulkhead carrier of the Atlas V Centaur second stage. The Mars Cube One (MarCO) Cube Sats were the first to travel interplanetary.

20. The Mars 2020 mission with its Perseverance rover is headed for Jezero Crater on the western edge of a flat plain called Isidis Planitia, just north of the Martian equator. Scientists believe evidence of past microbial life may be preserved in Jezero, which holds rocks and minerals that could only form in water. The mission also will deploy the Ingenuity helicopter, a technology demonstration to prove that powered flight can be achieved at Mars.