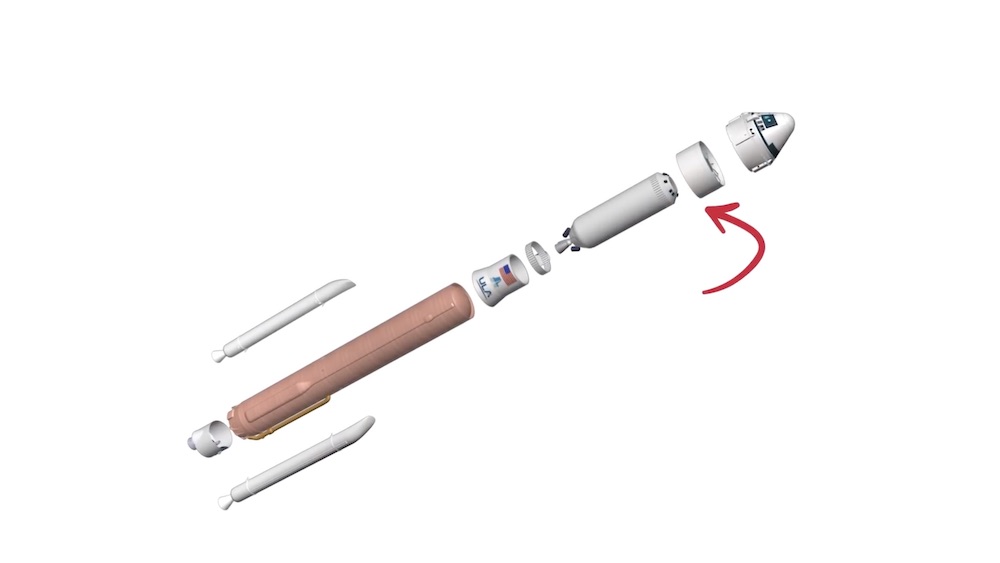 The Emergency Detection System computers are located on the forward end of the Centaur upper stage. Illustration by ULA

The United Launch Alliance (ULA) Atlas V, one of the most reliable rockets in the world, carries an extra layer of safety for its solemn duty of launching astronauts on human spaceflight missions.

The Emergency Detection System (EDS) was developed by ULA engineers to enhance the protection of astronauts riding atop the Atlas V by autonomously monitoring the health of launch vehicle systems. If the EDS detects an impending anomaly, it can trigger an abort faster than any human could possibly do so manually.

EDS uses the existing network of sensors and data-collecting instrumentation on the rocket and supplies that information to two new computers added to human spaceflight launches. Those redundant computers, known as EDS Processor Units (EPUs), constantly monitor parameters of critical rocket systems and can order the Boeing CST-100 Starliner capsule to abort off of the Atlas V in the blink of an eye.

"EDS is a critical element of our human spaceflight certified system because it allows us to use our flight-proven launch vehicle without significant modifications and adds an additional layer of safety and redundancy," said Lars Onsager, ULA's system integration lead in the development EDS and the engineer who helped formulate the boundaries for all EDS parameters.

"I helped create and approve each and every threshold, or trigger level, to eliminate or minimize the chances of inadvertent or 'false' aborts while still keeping the astronauts safe."

Atlas V with EDS increases the level of safety without redesigning or altering the rocket that has flown since 2002 with 100 percent mission success.

The EPUs will be sifting through data such as tank pressures, engine operating telemetry, accelerometers and gyroscopes aboard the rocket. The computers and their auxiliary power source are located on a ring structure above the Centaur upper stage and just below the Starliner spacecraft.

The EDS transitions to its flight configuration at T-minus 80 seconds and remains active until the scheduled release of Starliner from the Centaur upper stage about 15 minutes after liftoff.

The maiden launch of the Atlas V Starliner system on the first Orbital Flight Test was equipped with EDS in a passive mode. While the EDS was functioning throughout the flight and comparing all telemetry against the abort trigger thresholds, it was not configured to signal an actual abort for the uncrewed launch.

For the upcoming OFT-2 launch, the EDS will be operating in its active mode and capable of declaring an abort to preserve the uncrewed Starliner spacecraft if a serious problem arises with the launch vehicle. The Starliner is able to parachute back to Earth even in an abort.

ULA engineers used the first OFT launch as a full demonstration of the system's functionality, and the result was a complete success. None of the abort parameters were triggered, nor did any threshold need adjustment for the OFT-2 launch.

"The many years of effort that went into the building and testing of that system and the parameters controlling it was evident in the post-flight analysis," Onsager said.

Onsager is stationed on launch days with an elite group of ULA specialists at the Vehicle Ascent and Launch Operations Room (VALOR) at company headquarters near Denver. He serves as the ascent team lead authorized speaker (ATLAS), a position that relays real-time status to Starliner Flight Director Mike Lammers at NASA's Mission Control Center in Houston.

While EDS is in charge of detecting imminent or occurring hazards and signaling an abort in a split second, VALOR and the ascent team are responsible for observing slow-forming, difficult-to-program issues that may require experience to correctly troubleshoot.

"The ULA EDS system is as good as it is in part because of how simple or straightforward it is. However, not everything can be 'simple' and those are the issues we trained our team to identify and communicate. Together, EDS and VALOR provide the highest level of safety ULA could hope to achieve, building on our flight proven systems and adding safety measures on top," Onsager said.