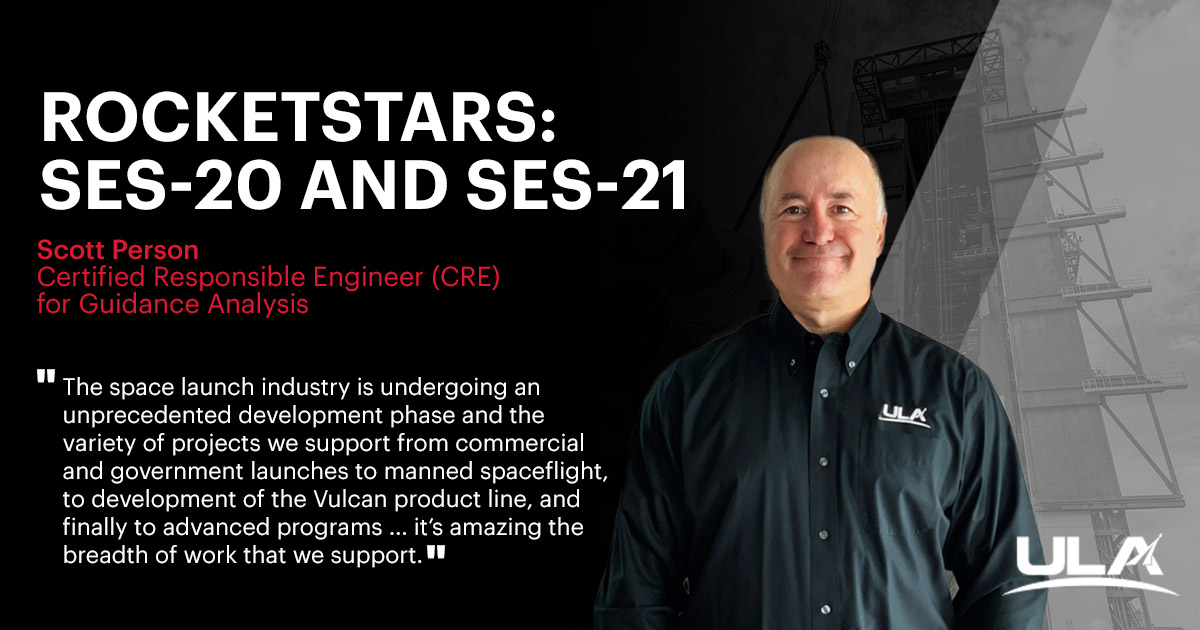 Person is ULA's Certified Responsible Engineer (CRE) for Guidance Analysis. He has worked extensively with satellite operator SES, payload manufacturer Boeing and the ULA team to produce a targeting plan for the Oct. 4 mission that was both challenging to develop and that met all customer requirements.

The Atlas V 531 rocket, with three solid rocket boosters, will carry the stacked SES-20 and SES-21 television relay satellites into near-circular, near-geosynchronous orbits just below their intended operational orbit in space. The all-electric satellites will use their onboard xenon propulsion to maneuver to their orbital slots.

Person graduated from the University of Florida in 1989 with a degree in aerospace engineering and immediately went to work for the heritage Atlas company General Dynamics in San Diego, California, as a rocket controls analyst before moving into the guidance arena. More than three decades later, he is still at it.

"Guidance Analysis touches a lot of other disciplines, and I get to work with a lot of really smart people on very complex topics. We get to find unique solutions to challenging problems. No two launches are alike, they all provide their own challenges and permutations from our previous experiences," Person said.

For the SES launch, he serves as the primary Guidance Responsible Engineer (RE), a job that has three main responsibilities to ensure mission success.

"Second, the Guidance RE for a mission performs trajectory dispersion analyses to verify that we can meet mission requirements for orbit injection accuracy, attitude and body rate requirements, heat flux requirements at payload fairing jettison and launch vehicle performance under dispersed conditions.

"Finally, we follow the flight parameters we generate through incorporation into the flight program and into our formal software test program for each mission. This involves a fair bit of test review and comparison back to our desktop simulation results."

The Atlas V will use three burns by the Centaur upper stage to send the SES-20 and SES-21 satellites into their high orbits, a flight that will last more than six hours. SES-20 will separate at T+plus 5 hours, 39minutes, followed by SES-21 separation at T+plus 6 hours, 18minutes.

"Working SES has been a lot of fun. I find this kind of work very interesting, which is what has kept me in the Guidance Analysis discipline for over three decades," he said.

While this is not Person's first dual-payload mission, he pointed out that that every mission flying multiple satellites has a different set of requirements that all manifest themselves uniquely.

"What you find is that we all speak a slightly different vernacular since we approach the same problem from different perspectives; but once you talk it out, it generally becomes clear what the customer is trying to achieve and what our team can do to help out. Once the mission requirements were understood, turning that set of requirements into a tangible sequence of burns, settling and turns is the best part of the job."

Another challenge for multiple payload missions is making sure that the satellites and Centaur stay clear of each other after being separated in orbit.

"Not only do we have to worry about Centaur staying clear of not just one but two payloads, we also have to make sure that the two payloads stay clear of each other until they have gained enough physical separation distance so that they can be independently maneuvered without concern of recontact," he explained.

Besides his current work as the Guidance RE on the SES launch, Person's broader Guidance CRE role ensures all ULA launches are successful.

"I get to work everything that flies on our Atlas, Delta and Vulcan missions because my primary responsibility as CRE is to check everybody else’s work.  So that involves tracing mission requirements into their parameter designs and verifying the systems are performing as expected under nominal and dispersed conditions.

"We check that our analyses were set up properly, ran properly and the results are as expected. We debug problems and figure out solutions all the time. That part of the job is what keeps me interested."

A newer assignment he also has taken involves the Ascent Team, ULA's cadre of specialists who support human spaceflight launches such as the Boeing CST-100 Starliner spacecraft on Atlas V and the ULA-built Interim Cryogenic Propulsion Stage to launch Orion capsules atop NASA's Space Launch System.

"As ULA has delved back into human spaceflight, I've been working with the Ascent Team and I’m a certified flight controller as a BASC (backup ascent team) for both the NASA's Commercial Crew Program and Artemis programs," Person said.

"I’m one of the two ULA authorized speakers to the Houston control teams. My role in that is the backup ascent team, BASC. It’s made up of me and another engineer who is well trained in interpreting flight data and making the associated calls to the Houston flight control team. As a BASC, our job is to take over if/when the Denver-based primary Ascent Team loses communications or data, except there are only two BASCs versus 10 or so members of the Denver team. Talk about pressure!"

Person has worked more than 200 successful rocket launches, including some memorable ones noted for their historical significance.

"I've been blessed to have supported a lot of first flights and high-profile missions. The most memorable are: AC-102, the first Atlas II, as the first mission I worked on; AC-201, the first Atlas III, flying the RD-180, as I was responsible for the throttle control on that booster, a new capability; AV-001 was the first flight of ‘my’ guidance system and the first Atlas V; AV-007 with Mars Reconnaissance Orbiter, my first interplanetary mission; and AV-010 with New Horizons to Pluto, that was such a high-profile mission, and was unique in that our software was modified to guide the third stage kick motor burn. It was wildly successful and at the time was the fastest human-made object to leave Earth's gravity."

ULA will provide comprehensive live updates on the Atlas V countdown and flight starting at 10:00 a.m. EDT (1400 UTC) in our automatically refreshing blog. A webcast of the launch begins 20 minutes before liftoff.

RocketStars: McFarland is one of ULA's most experienced teammates