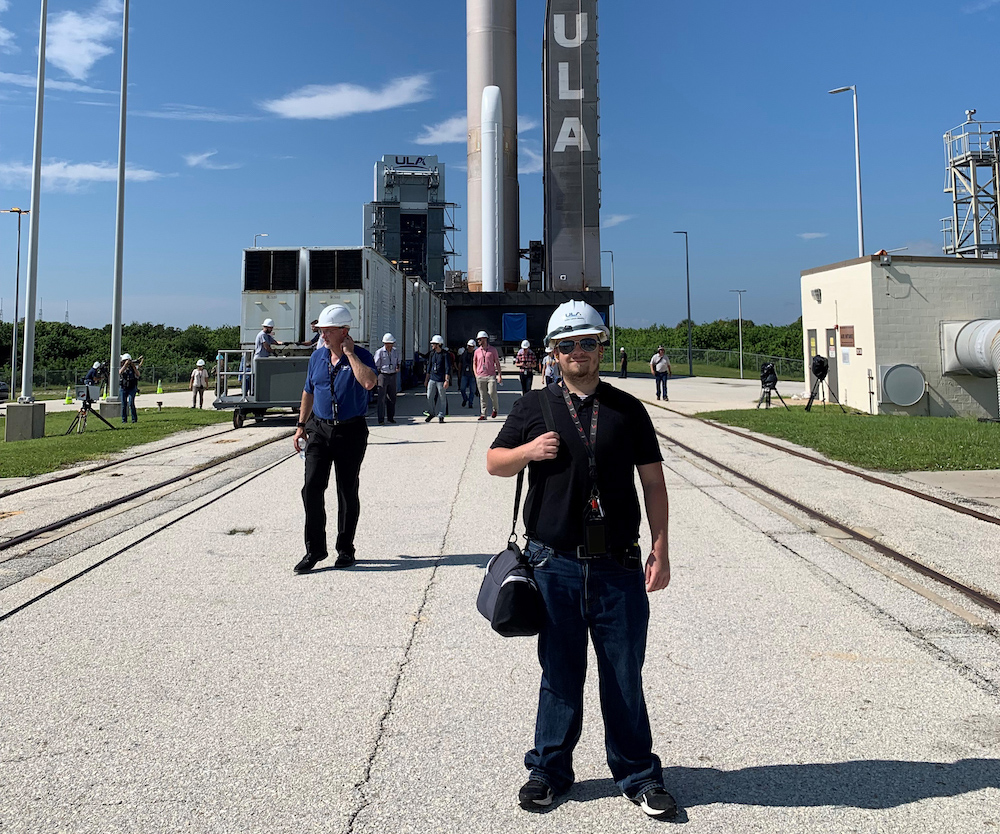 From a United Launch Alliance (ULA) internship to becoming a launch controller, Chris Napoli is honing his engineering skills today at Cape Canaveral on Atlas V missions while preparing for the next-generation Vulcan Centaur rocket.

Born in Hartford, Conn, and a mechanical engineering graduate of the University of Central Florida, Napoli has been a part of 10 ULA missions since joining the company full time two years ago.

"I worked as an intern here on the Atlas program in 2018. I had a wonderful experience with the Atlas booster and Centaur teams. That internship prepared me for my career by allowing me the chance to become familiar with systems engineering, reading and writing procedures, and familiarizing myself with the systems I was actively working on. It allowed me to watch and learn from other engineers, and develop test discipline," Napoli said.

For Atlas V launches, and soon for Vulcan, Napoli serves as the environmental control system (ECS) and umbilical retract engineer. That means during countdowns to launch, he is in the Launch Control Center at the MEQ console, also known as "Umbilicals" during the final readiness poll before liftoff.

The ECS supplies conditioned air and gaseous nitrogen to the internal compartments of the rocket and the payload fairing to prepare for cryogenic fueling and the launch. Ducts route the ECS from ground equipment to the launch vehicle, and Napoli's job ensures a clean separation of those umbilicals at liftoff.

Napoli filled the position held by an employee who had worked for ULA and the heritage company for more than 30 years, stepping in as a new generation assumes the responsibilities of launching the nation's critical space assets.

"It was a lot of pressure to follow in those footsteps. Everyone had come to rely on him and his experience with Atlas, as he had been here since AV-001, the very first Atlas V mission, and then they were left with a young engineer who has only been here for a couple of years. I've worked hard to make sure that I learned and retained everything I could from him so that I could fill that position as seamlessly as possible," Napoli said.

"I'm very passionate about my job. It is a humbling but rewarding experience to be a part of launch operations and I’m extremely excited to see what the future holds for Vulcan."

Napoli is on the frontline as ULA prepares for the inaugural mission of the Vulcan launch system and the invigorating transition to the new high-performance rocket.

"I became involved with Vulcan about a year ago, when the operations team began writing the initial procedures in preparation of the Pathfinder Tanking Test (PTT) booster arriving. My primary responsibilities are the assembly and integration of the ECS umbilicals, the ground wind damper (GWD), and the umbilical retract systems and connection to the vehicle," Napoli said.

Vulcan pathfinder operations recently transitioned to Space Launch Complex (SLC)-41 for a series of fueling tests in the coming weeks that will systematically validate launch pad infrastructure with the rocket, evaluate countdown procedures and train the launch team in advance of the maiden Vulcan mission.

"Seeing the PTT booster on the pad being tanked for the first time was an incredibly satisfying experience," Napoli said.

If you are interested in applying for a ULA internship, job postings opened in the ULA Intern Career Center on Sept. 7 for the summer of 2022.