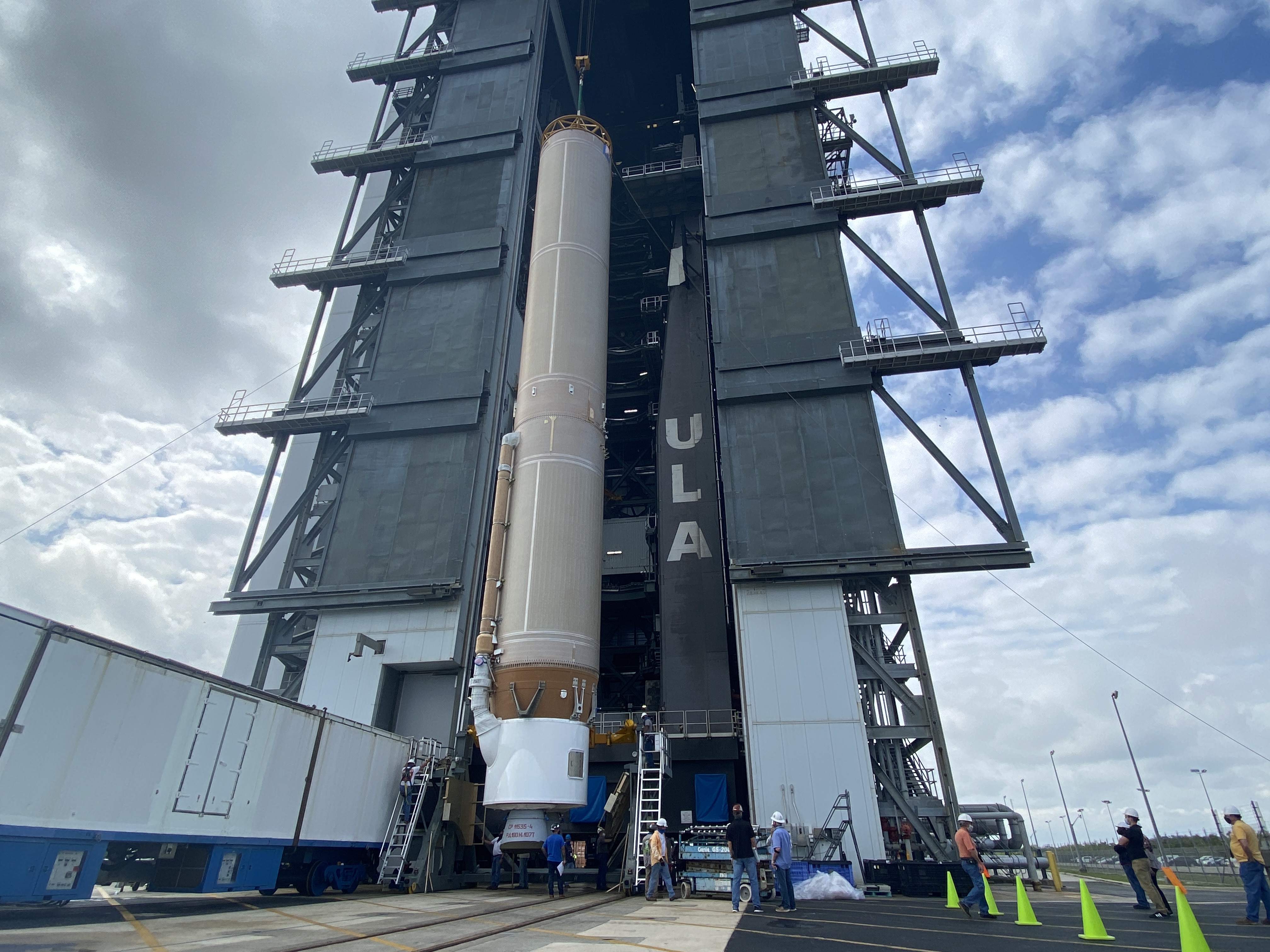 United Launch Alliance's (ULA's) Atlas V rocket, entrusted to launch all of the satellites in one of the most important U.S. national security space constellations, is being readied to deploy the next craft in the high-priority series.

An Atlas V 421 vehicle was assembled this past week at the Vertical Integration Facility (VIF), located near Space Launch Complex-41 at Cape Canaveral Space Force Station, Florida. Liftoff is targeted for May 17.

SBIRS consists of a network of satellites to support missile warning, missile defense, battlespace awareness and technical intelligence. Equipped with scanning and staring infrared sensors, the spacecraft continue to serve as the tip of the spear for global missile warning as ballistic missile threats proliferate around the world.

Atlas V has launched all four SBIRS GEO satellites to date and will continue as the exclusive launch vehicle of choice by deploying the fifth and sixth satellites to complete the constellation. GEO-1 was launched in 2011, GEO-2 in 2013, GEO-3 in 2017 and GEO-4 in 2018. Launch of the GEO-5 satellite is scheduled for next month and GEO-6 follows next year.

Atlas V delivers the Lockheed Martin-built SBIRS satellites into a standard geosynchronous transfer orbit (GTO). The satellites then use their own propulsion system to circularize the orbit at approximately 22,000 miles (36,000 km) above the equator.

SBIRS GEO-5's rocket, designated AV-091, arrived at the launch site from ULA's factory in Decatur, Alabama, aboard the R/S RocketShip on April 1. After completing initial preps at the Atlas Spaceflight Operations Center (ASOC), the first stage was declared ready to begin stacking operations for launch.

Vertical integration of the two-stage rocket with a pair of side-mounted solid rocket boosters started on Wednesday, April 21 as the 107-foot-long (32.6-meter) stage was brought to the VIF and hoisted upright for placement aboard the Mobile Launch Platform (MLP).

This achieved the Launch Vehicle on Stand (LVOS), a milestone that officially begins the launch campaign.

On Friday, April 23 and Saturday, April 24, the twin AJ-60 solid rocket boosters (SRBs) were affixed to opposite sides of the first stage. The SRBs will provide nearly half of the energy at liftoff to power the million-pound rocket and SBIRS GEO-5 spacecraft into the sky.

The basic buildup of the rocket was completed on Monday, April 26 as the pre-integrated assembly known as OVI, or Off-site Vertical Integration, arrived at the VIF for mounting atop the first stage. The OVI is comprised for the interstage, Centaur upper stage and base of the payload fairing. 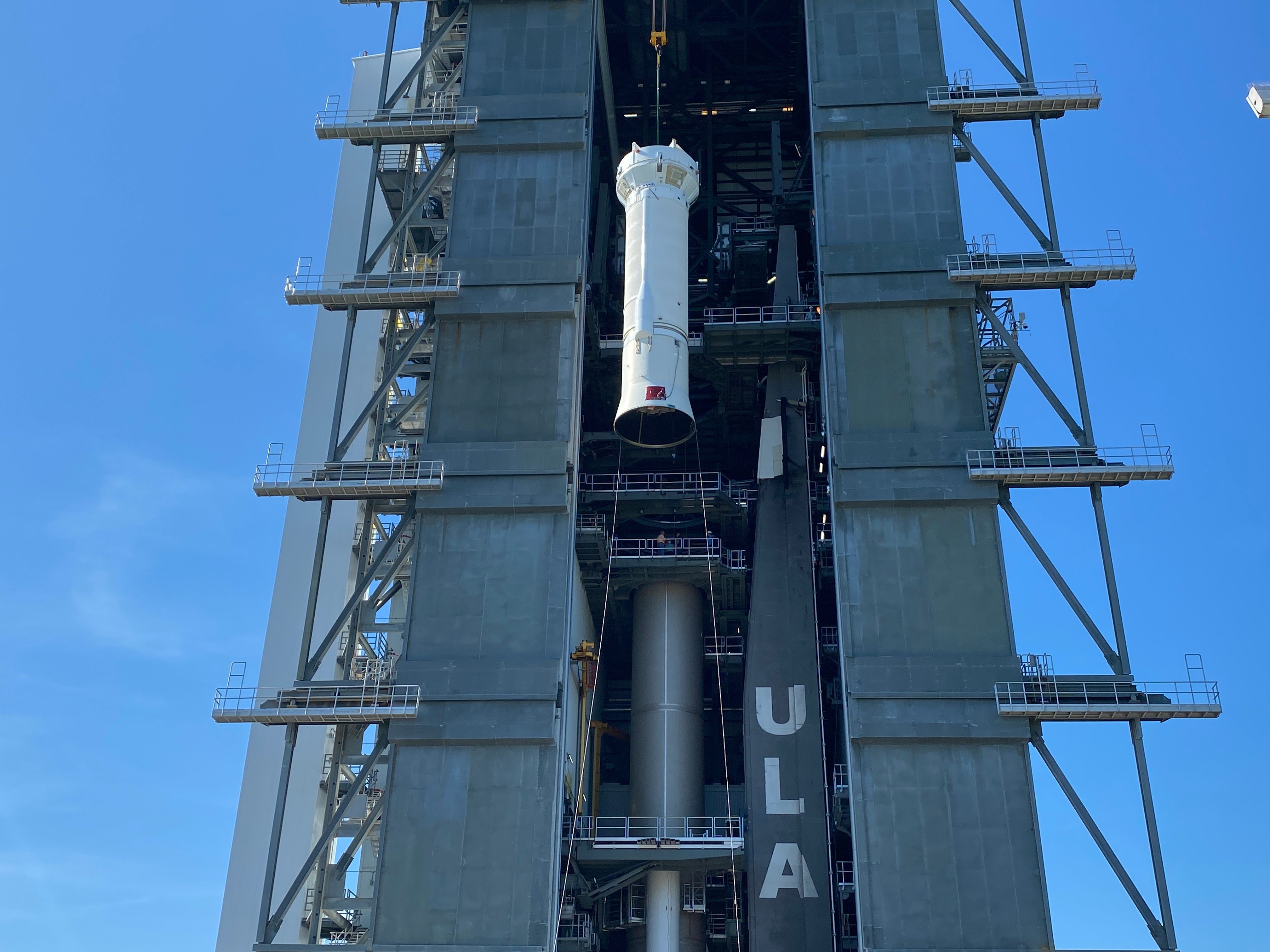 This Centaur is powered by the first RL10C-1-1 cryogenic engine, the latest update to the venerable RL10 that has flown more than 500 times since 1962. The RL10C-1-1 will produce 23,825 pounds (106 kilo-Newtons) of thrust as it burns liquid hydrogen and liquid oxygen to achieve an initial Earth orbit and later re-ignites to accelerate SBIRS GEO-5 into a highly elliptical geosynchronous transfer orbit.

Inside the VIF, activities to verify Atlas V readiness will include powering up the rocket, checking the flight control systems on the Atlas and Centaur stages, performing engine steering profiles and running the Combined Systems Test.

The 194-foot-tall (59-meter) rocket will be completed in early May when the encapsulated SBIRS GEO-5 satellite is lifted atop the Atlas V for launch.