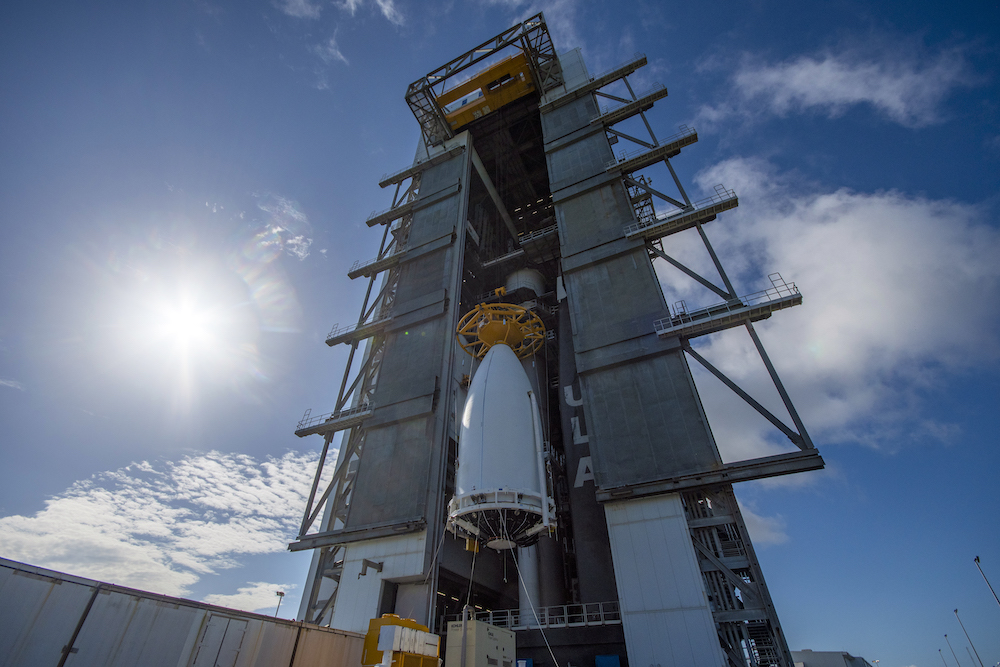 SES-20 and SES-21 are lifted into VIF for attachment to Atlas V. Photo by United Launch Alliance

Two commercial satellites that will relay television channels to millions of homes across America are aboard their shared United Launch Alliance (ULA) Atlas V rocket at Cape Canaveral, Florida, for launch into near-geosynchronous orbit.

Global commercial satellite operator SES selected Atlas V to perform this dual-manifest launch of its SES-20 and SES-21 spacecraft, given the rocket's ability to deliver both satellites to an advantageous orbit that will dramatically reduce the amount of time leading up to the satellites entering service.

The almost-identical SES-20 and SES-21 satellites are part of SES's accelerated C-band clearing plan to meet the Federal Communications Commission's objectives to roll out 5G services across the United States. These new spacecraft will enable SES to clear 280MHz of mid-band spectrum for 5G use by seamlessly migrating SES's existing C-band customers to higher frequencies ensuring the continued delivery of digital television to nearly 120 million American homes and other critical data services.

SES-20 and SES-21 will operate in the 103 degrees West and 131 degrees West orbital slots, respectively, and are expected to begin operations by November 2022.

The spacecraft were delivered to ULA's Vertical Integration Facility (VIF) before dawn today for lifting aboard the launch vehicle. This will be the 20th commercial launch of the Atlas V and the rocket's 96th overall.

Preparations for the launch began Aug. 26 with the start of pre-flight assembly at the VIF. The two-stage rocket and its three strap-on solid rocket boosters (SRBs) is designated AV-099. The first stage was brought over the road to the VIF and then hoisted vertically to stand aboard the mobile launch platform (MLP), which will carry the completed rocket to the launch pad for fueling and liftoff.

The first stage will consume approximately 48,800 gallons of liquid oxygen and 25,000 gallons of highly refined kerosene propellant to generate 860,200 pounds (3.83 mega-Newtons) of thrust to power the Atlas V during the initial four minutes of flight.

On Aug. 30 through Sept. 1, three GEM 63 SRBs were attached to the first stage. They will be ignited at liftoff to augment the main engine and provide more than half of the power of launch. Each motor delivers 371,550 pounds (1.6 mega-Newtons) of thrust through the first 90 seconds of flight.

The Centaur upper stage was lifted into the VIF and connected to the first stage on Sept. 2. The cryogenic stage's single RL10C-1-1 engine -- a new and higher performing variant of the venerable engine family -- burns liquid hydrogen and liquid oxygen to produce 23,825 pounds (106 kilo-Newtons) of thrust.

Atlas V will use three burns of the Centaur upper stage to inject both spacecraft into near-circular, near-geosynchronous orbits at only 1.9 degrees of inclination.

The optimized flight design and performance of the Atlas V 531 rocket will place both satellites close to their operational stations in space. This translates to minimal orbit raising by the spacecraft to reach their destination, enabling a more timely activation of commercial services.

It will take several hours for Atlas V to carry its dual payload to the intended deployment orbit 21,700 statute miles (35,000 km) in altitude. SES-20 will separate at T+plus 5 hours, 39 minutes, followed by SES-21 separation at T+plus 6 hours, 18 minutes.

SES-20 and SES-21 were built by The Boeing Company in El Segundo, California. The highly efficient all-electric 702SP satellites are designed to operate in geostationary orbit approximately 22,300 miles (36,000 km) above the Earth.

The satellites use Xenon-ion propulsion systems (XIPS) that significantly reduce their launch mass over conventionally fueled engines, thus allowing two large satellites to be launched in tandem by the same rocket for affordability and efficiency.

Each satellite is equipped with C-band transponders to relay digital TV signals to millions of homes in the continental U.S.

SES operates the world's only multi-orbit constellation of satellites with the unique combination of global coverage and high performance. SES's video network carries about 8,000 channels and has an unparalleled reach of 366 million households around the world. The SES mission will be the 678th launch of an Atlas and the 378th to originate from Cape Canaveral. At liftoff, the Atlas V 531 rocket's main engine and trio of SRBs generate two million pounds (9 mega-Newtons) of thrust, or approximately 27 million horsepower.

This is the fifth flight of the Atlas V 531 configuration, first flown in August 2010 to successfully launch the Space Force's AEHF-1 strategic communications satellite. This variant also launched the second and third AEHF missions in 2012 and 2013 and NROL-101 in 2020.

ULA will provide comprehensive live updates on the Atlas V countdown and flight starting at 10:00 a.m. EDT (1400 UTC) in our automatically refreshing blog. A webcast of the launch will begin 20 minutes before liftoff at 5:16 p.m. EDT (2116 UTC).