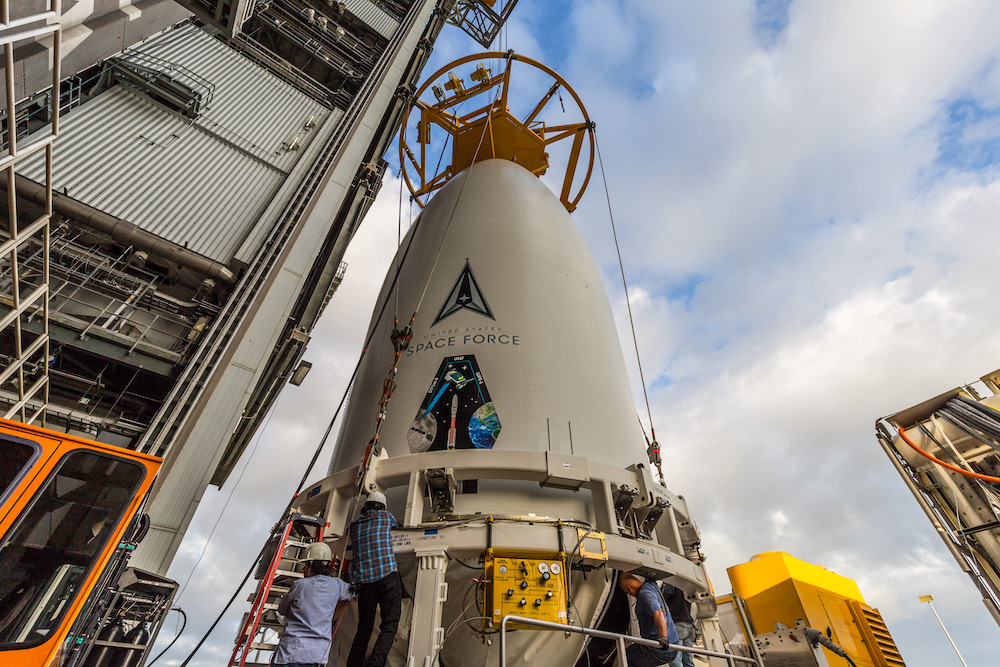 The STP-3 payload is hoisted aboard the Atlas V launch vehicle at the Vertical Integration Facility (VIF). Photo by United Launch Alliance

The most powerful variant of the Atlas V rocket is ready for its longest flight in history to deliver two spacecraft into geosynchronous orbit for the U.S. Space Force.

The STP-3 mission matures technology and reduces future space program risk for the Department of the Air Force and the Space Force by advancing warfighting capabilities in the areas of nuclear detonation detection, space domain awareness (SDA), weather, and communication.

At the 30-story Vertical Integration Facility (VIF) this morning, the encapsulated payload has arrived for hoisting atop the launch vehicle. The VIF is the primary facility for Atlas V pre-flight processing at Cape Canaveral. 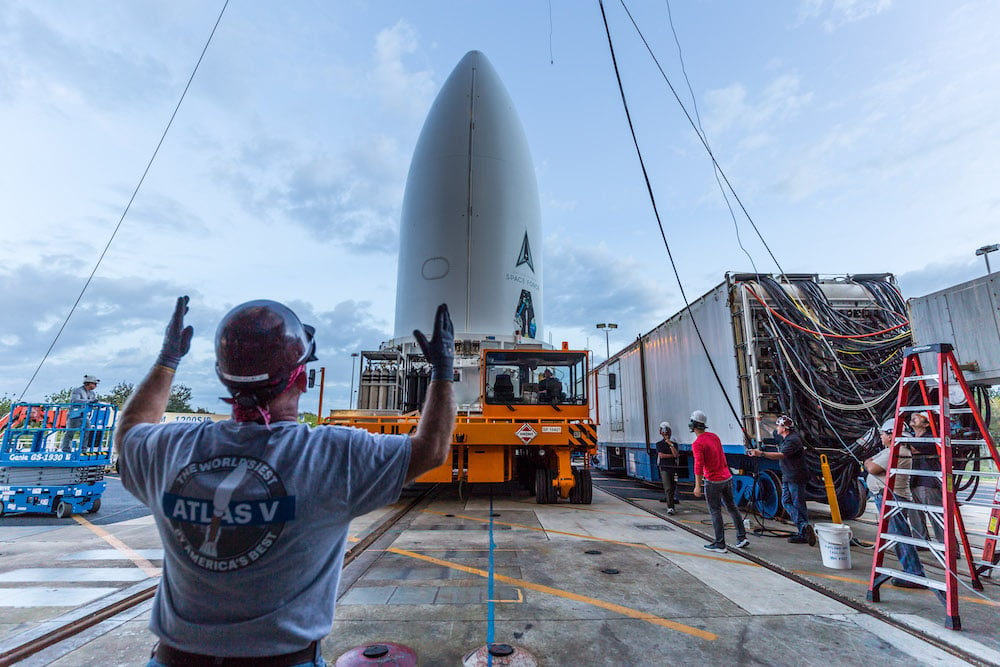 SABRS-3 was built by Los Alamos National Laboratory to detect nuclear explosions in the atmosphere or space for treaty verifications and global security. SABRS are part of the sensing element of the United States Nuclear Detonation Detection System, which monitors the entire globe, from the surface of the Earth, out to deep space, for nuclear detonations.

Situated between the Centaur upper stage and STPSat-6 is the LDPE-1 spacecraft carrying a suite of experiments for rapid risk reduction efforts to inform future programs.

The satellites underwent launch preparations at the Astrotech payload processing campus in nearby Titusville. After stacking the payloads and encapsulating them in the five-meter-diameter (17.7-foot) fairing, the combined assembly was placed aboard a ULA motorized transporter for the trek to the VIF.

This launch will use the first Out-of-Autoclave (OoA) fairing aboard an Atlas V mission, beginning a transition for ULA to accumulate flight experience and reduce risk before use on our Vulcan Centaur rocket. OoA payload fairings are more affordable, comprised of few parts and easier to build in an alternative process to cure carbon fiber composites that avoids a high-pressure autoclave.

It will take more than seven hours for the Atlas V 551 rocket to carry both payloads to their desired destination and deploy them more than 22,000 miles above Earth in geosynchronous orbit.

A direct-insertion geosynchronous orbit launch is one of the most challenging types of missions required by national security spaceflight. The launch vehicle performs three firings of its upper stage to deliver the payload to an altitude more than 22,000 miles over the equator without the satellites themselves needing to perform any large-scale orbit-raising maneuvers. Geosynchronous orbit is the location where satellites match the Earth's rotation and remain in lockstep above the same spot of the globe as they orbit.

For more than 50 years, the Space Test Program (STP) has demonstrated cutting-edge technologies in space prior to operational use. Advancements in navigation, surveillance, nuclear detection, communications, weather observation, and ground radar calibration were spurred by STP, as well as expanding our knowledge of the space environment, radiation, and the solar influence.

The launch of STP-3 is scheduled for 4:04 a.m. EST (0904 UTC). ULA will provide live countdown updates in our blog beginning at 8:30 p.m. EST (0130 UTC) and a webcast of the launch starting a half-hour before liftoff. Both can be found on the ULA website.