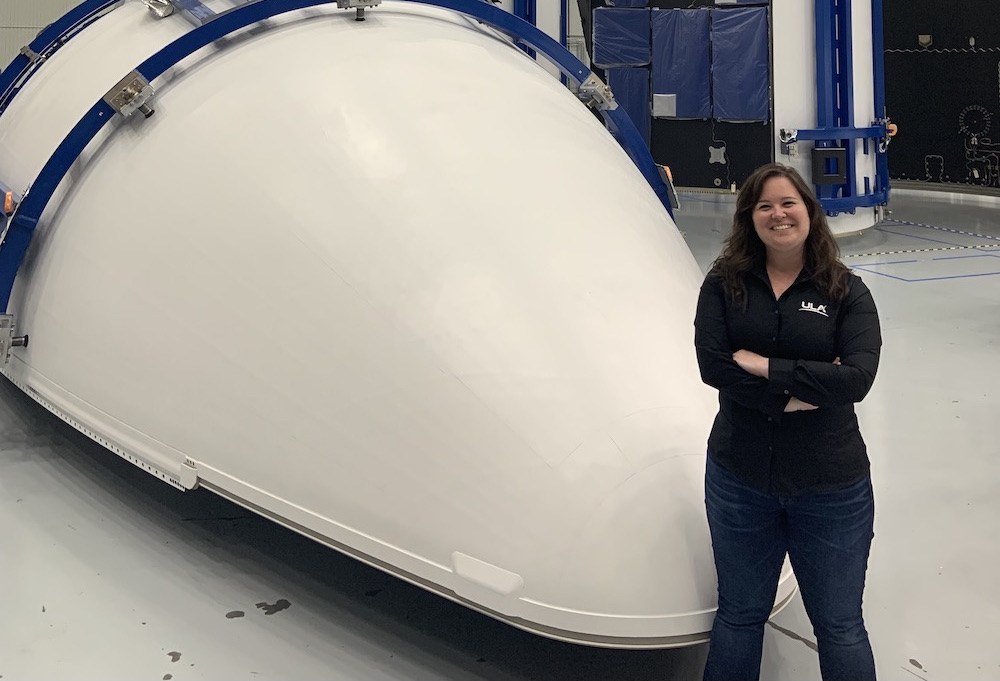 Collins, once a two-time intern at ULA, is the company's certified responsible engineer (CRE) for the 5.4-meter diameter (17.7-foot) payload fairings flown on Atlas V and soon on the next-generation Vulcan rocket.

The previous design, built by RUAG Space in Switzerland, has successfully flown on 31 Atlas V 500-series rockets to date. The STP-3 launch will debut the Out-of-Autoclave (OoA) payload fairing, an innovative design that is built more efficiently and affordably than the earlier construction method.

The OoA fairings use an alternative process to cure carbon fiber composites using only an oven, avoiding a high-pressure autoclave that is expensive and restricts the size of pieces that can fit inside.

It may look no different to the casual observer, but the OoA weighs and costs less while being easier and quicker to make. OoA allows the payload fairings to be produced in two halves instead of 18 or more smaller sections from the in-autoclave process. That means less opportunities for defects and fewer fasteners and doublers to hold the pieces together.

"There are several advantages to the OoA configuration. It provides a simpler and more cost-effective method to build the payload fairing," said Collins.

"The Atlas OoA fairing also lays the groundwork for the development, production facilities infrastructure, and qualification activities for the new Vulcan fairing.

OoA will be flown on upcoming Atlas V launches to accumulate flight experience before use on Vulcan, reducing risk for our next-generation rocket. In fact, a significant portion of Vulcan systems will have flown on Atlas and Delta rockets before its inaugural Vulcan launch.

The OoA fairings are American-made by RUAG Space USA next door to ULA's rocket factory in Decatur, Ala. The in-autoclave fairings for Atlas were manufactured by RUAG's team in Switzerland, then shipped to the launch site.

The OoA 5.4-meter fairings for Atlas V will continue to be available in three different lengths for encapsulating the satellites during ascent and retain the heritage design that features lower sections, called the base module, that surround the Centaur to share the loads from heavy payloads.

For Vulcan, however, the fairing will attach to the top of Centaur V and not enclose the upper stage. OoA will be used for all Vulcan fairings, which will come in lengths of 15.5 meters (51 feet) and 21.3 meters (70 feet).

She joined ULA right out of college after completing two internships with the company.

As CRE, Collins is the technical and programmatic lead for the payload fairing sub-system.

"I am excited to support the final launch processing of STP-3 with the first OoA payload fairing and provide onsite support at Cape Canaveral Space Force Station for the launch!"