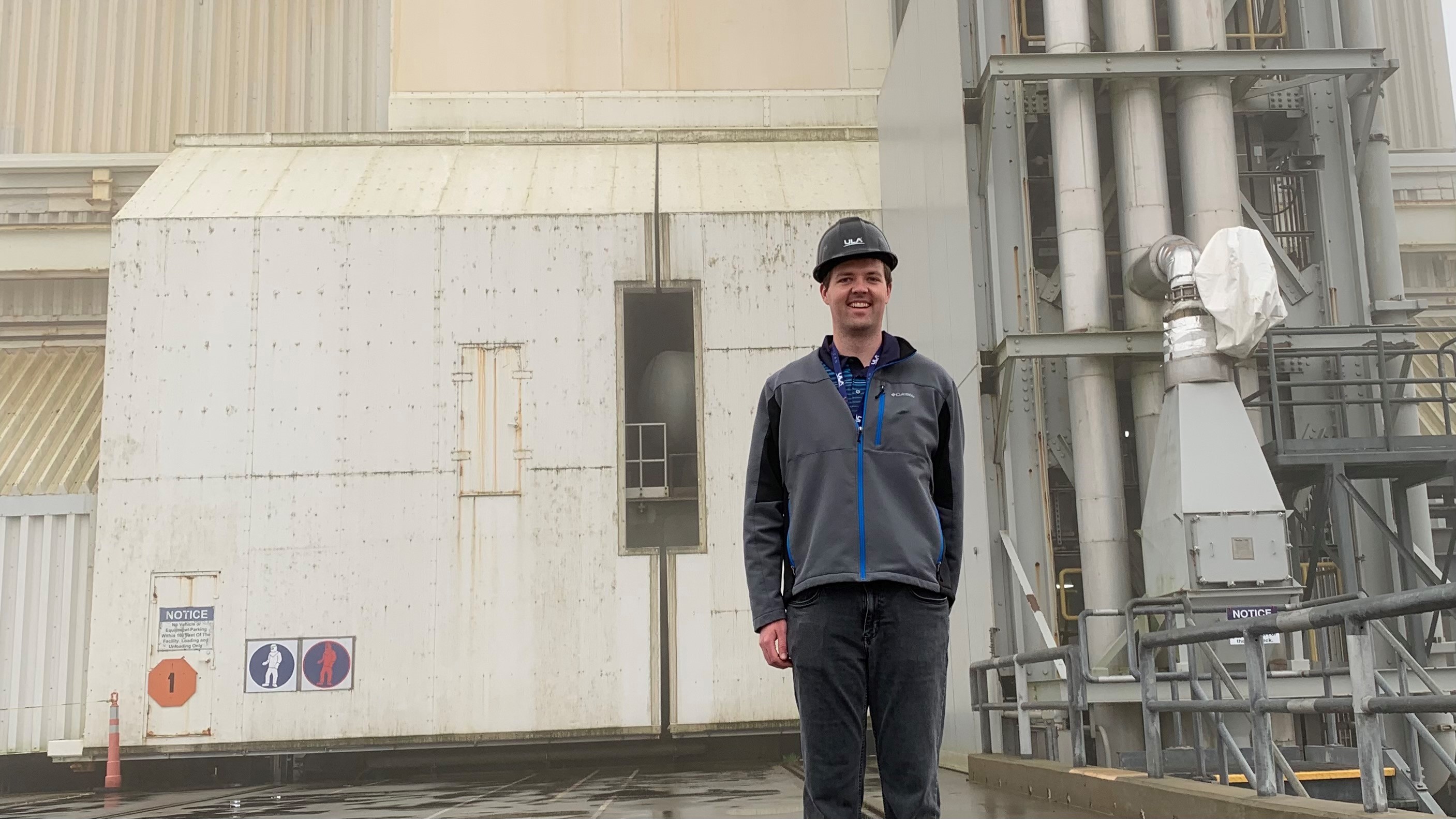 Thomas Scruggs, an orbital mechanics expert at United Launch Alliance (ULA), had the complex task of crafting the launch trajectory for the Atlas V rocket to send NASA's Lucy spacecraft on its once-in-a-lifetime opportunity to visit 8 asteroids.

"Lucy is such a special mission. I am looking forward to watching its 12-year journey and knowing that I had a part in the initial phase of the mission," Scruggs said. "I can't wait to see the incredible science that results from the asteroid flybys."

As the Lucy mission engineer within ULA's Flight Design group, Scruggs worked through four iterations of the trajectory to develop the optimum course for Atlas V to deliver Lucy on its Earth escape flight path.

Developing the Atlas V route had to satisfy multiple factors such as meeting Lucy's requirements during its ascent into space, maximizing the number of days available to launch the mission, and placing the spacecraft on a path to intercept the desired interplanetary trajectory.

Unique specifications, such as protecting the spacecraft science instrumentation from solar heating during launch, also drove the trajectory design.

"During the second Centaur burn, we have to roll the Centaur in a particular attitude to meet this 'keep out zone' while also maintaining all of our launch vehicle requirements," Scruggs said.

Another factor ensures launch events occur within telemetry coverage areas to continue the flow of Centaur data to the ground. 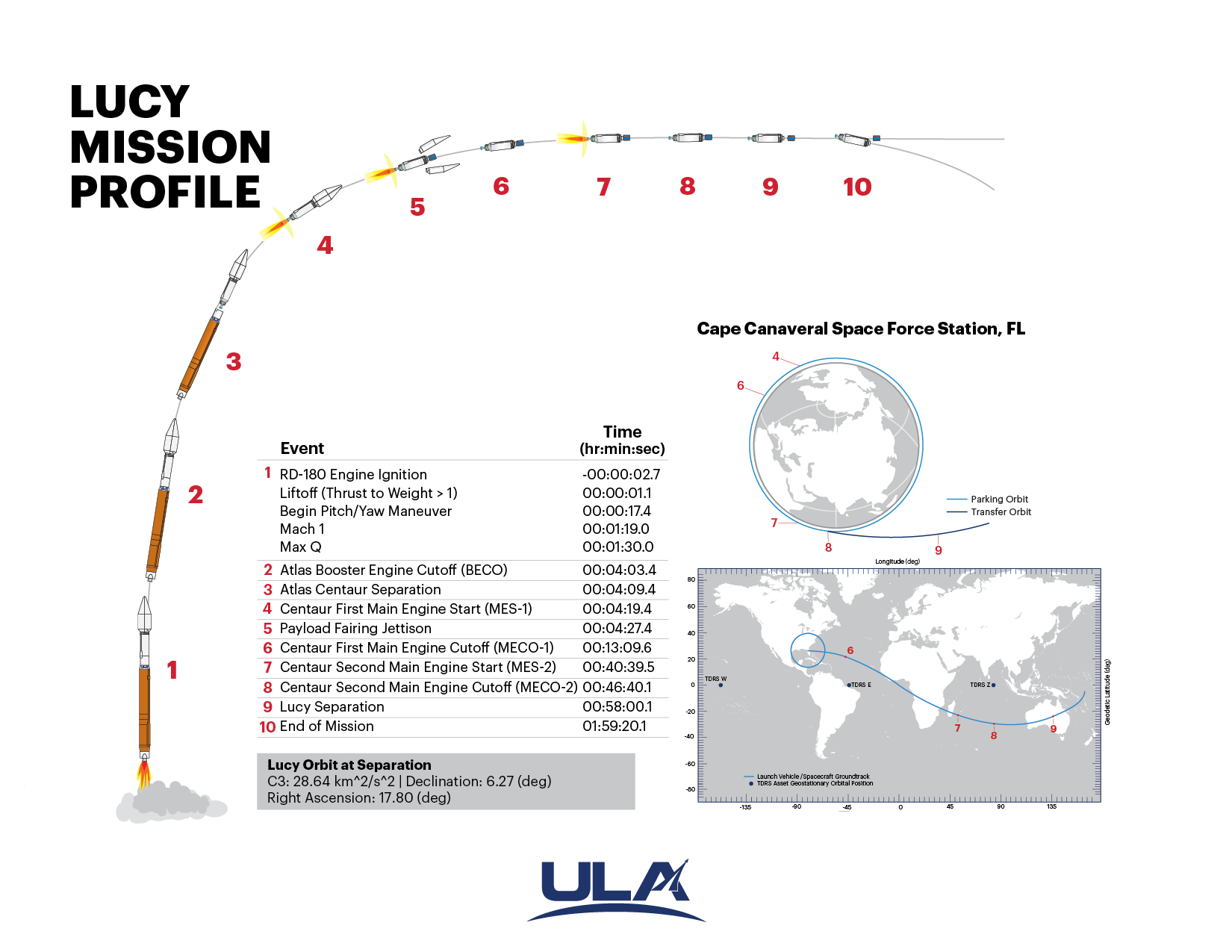 Scruggs seized on the Atlas V's performance to increase Lucy's three-week launch period by two additional days. The narrow period occurs when the Earth and the mission's Trojan asteroid destinations all align to embark on the 4-billion-mile voyage.

"We collaborated with NASA on the capabilities of the Atlas V vehicle in conjunction with the goal of minimizing the amount of propellant Lucy would need to use to achieve all of its goals," Scruggs said.

"However, the two additional days were added to the planetary window in the span of just two months' work, when the other 21 days had been planned and analyzed over the course of a year. This required increased communication between ULA and NASA to ensure that these two days were up to the same level of design readiness as the original 21."

The Atlas V 401 rocket will perform two burns of the Centaur upper stage, accelerating the 3,300-pound (1,500-kg) Lucy to 27,179 mph (43,741 kmph) for a maximum velocity at the second engine cutoff (MECO-2) before deploying the spacecraft nearly an hour after liftoff.

The energy needed for Lucy's trajectory is greater than going to Mars, but in line with other recent Atlas interplanetary missions like Solar Orbiter, Scruggs said.

The Atlas V will also employ Right Ascension of the Ascending Node (RAAN) steering during the Lucy launch. RAAN is out-of-plane steering that enables ULA rockets to launch a little before or a little after the optimal point and still hit the required target in space. Otherwise, there would be only an instantaneous launch opportunity each day to achieve the hyperbolic departure orbit.

"RAAN steering is the method that allows us to account for the rotation of the Earth as we steer the Centaur through its burns. This results in us being able to target to the same hyperbolic departure orbit regardless of our launch time relative to the optimal launch time," Scruggs said.

"For this mission, the optimal launch time is roughly in the middle of the window on each day and we build the windows based on the resulting propellant levels at MECO-2 as we increment the time on the plus and minus side of the optimal time."

Designing Lucy's orbit after separation from the Atlas V rocket is a collaborative process between ULA and NASA. Scruggs strived to ensure a smooth transition as the rocket deploys Lucy on its Earth escape trajectory by helping to refine the daily hyperbolic targets that will ultimately maximize the possible mission length for the spacecraft.

Lucy will swing by the Earth twice en route to visit a main belt asteroid and before reaching the first swarm of Trojan asteroids for five flybys. The spacecraft's course then loops back near Earth for a gravity-assist maneuver to reach the other swarm of Trojans for two additional encounters.

The flight path is like performing Figure 8's between Earth and the orbit of Jupiter. Lucy will remain on a stable orbit which will enable it to continue on its interplanetary, hyperbolic trajectory for many thousands, and possibly millions, of years. 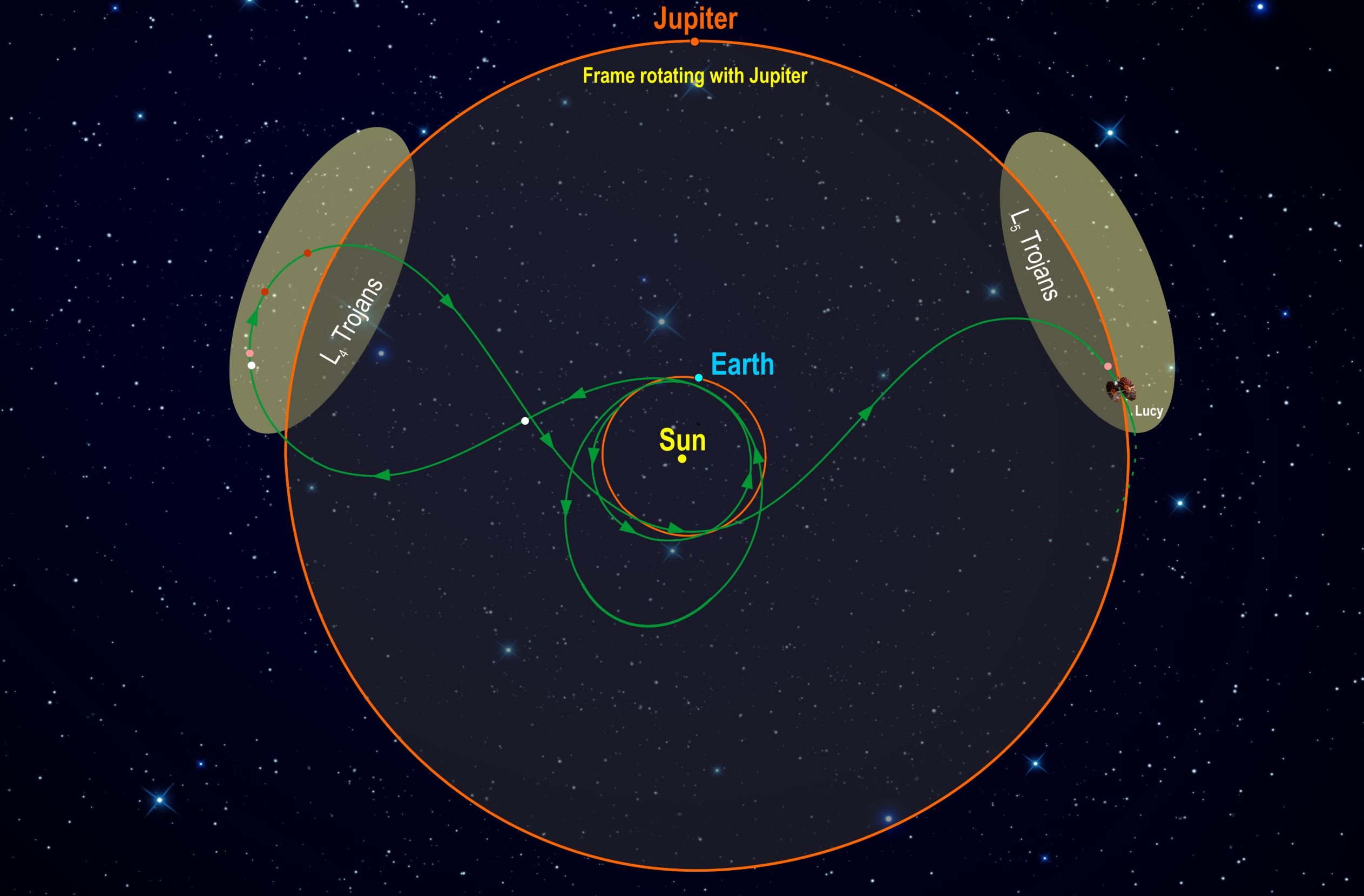 Born and raised near Cape Canaveral in the neighboring community of Merritt Island, Scruggs grew up watching launches from his backyard. His mother worked as a civilian supporting the Eastern Range in a 30-year career.

He earned bachelor's and master's degrees in aerospace engineering from the University of Florida. Since joining ULA, Scruggs has worked on the launches of Parker Solar Probe, Solar Orbiter, Landsat 9 and Lucy, and will be supporting numerous upcoming missions including USSF-8, USSF-12, Viasat-3 and USSF-87.

Scruggs enjoys surfing, snowboarding, hiking and playing basketball. "Actually, basketball got me into a little trouble the last time I traveled to the Cape to support a launch. I ended up tearing my Achilles three days before Solar Orbiter launched, so I will be steering clear of all basketball courts until after Lucy launches!"