The Atlas V first stage is hoisted into position aboard the Mobile Launch Platform. Photo by United Launch Alliance

Preparations are underway at Cape Canaveral for our next Atlas V launch dedicated to U.S. national security, a complex mission lifting two satellites to the high ground of geosynchronous orbit.

The trajectory requires three burns by the Centaur upper stage, incredibly precise navigation to inject the satellites directly into geosynchronous orbit, and special accommodations for the rocket to complete deployment of the payloads more than seven hours after liftoff.

United Launch Alliance (ULA) is performing the STP-3 launch for the U.S. Space Force’s Space Systems Command. Nearly 60 percent of all Atlas V missions to date have been in service to U.S. national security.

Stacking of the Atlas V rocket, designated AV-093, began at the Vertical Integration Facility (VIF) on Monday, Oct. 25 when the common core booster (CCB) first stage was positioned aboard the Mobile Launch Platform (MLP) for the Launch Vehicle on Stand (LVOS) milestone.

LVOS day started before dawn as the doors to the Ordnance Bay at the Atlas Spaceflight Operations Center (ASOC) slid open and the 107-foot-long (33-meter) stage emerged behind a semi-truck. The first stage was hauled up the road to the VIF where cranes pivoted the rocket vertically and hoisted it into the facility for seating on the MLP.

Over the next two weeks, all five solid-propellant GEM 63 boosters were attached to the first stage.The Graphite Epoxy Motors (GEMs) are a lower-cost alternative to the AJ-60 solid rocket boosters used by Atlas V since 2003. Northrop Grumman, a strategic partner of ULA, produced more than a thousand GEMs for Delta rockets over the past three decades and will now supply GEM 63s for Atlas as a stepping-stone for using GEM 63XLs on ULA's next-generation Vulcan Centaur rocket. The GEM 63s successfully debuted on the Atlas V launch of NROL-101 in November 2020.

Each of the GEMs, weighing nearly 100,000 pounds (45,000 kg), were trucked to the VIF on flatbed trailers and raised by crane into the building for connection to Atlas. Two were mounted to the south-side of the first stage and three were attached to the north-side. 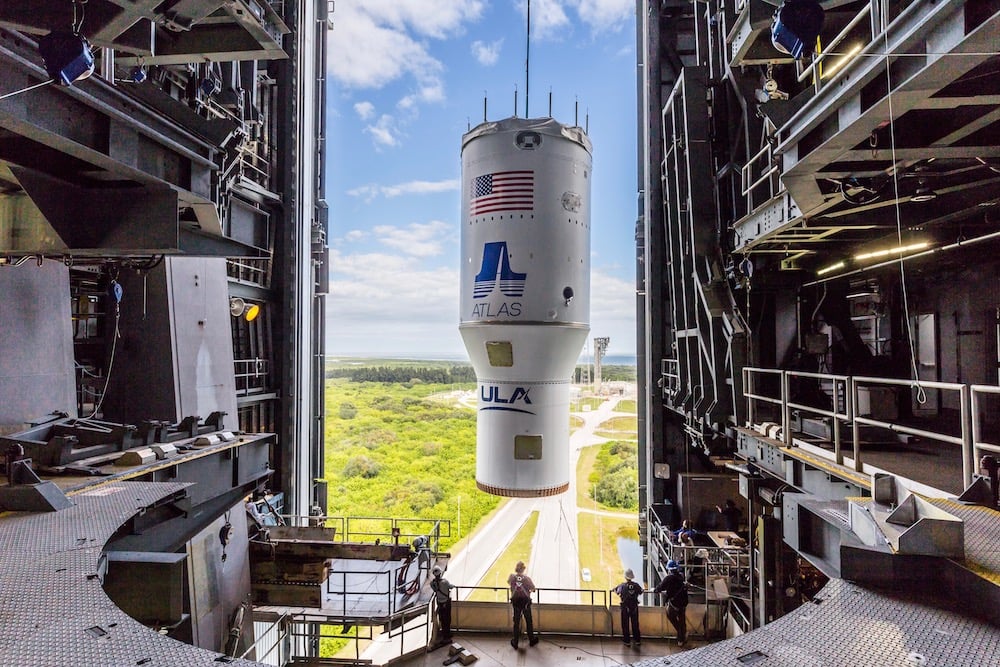 Initial buildup of the STP-3 launch vehicle was achieved today when technicians attached a pre-assembled structure featuring the interstage, Centaur upper stage and lower halves of the payload fairing. It is known as the OVI element, or Off-site Vertical Integration.

Centaur is equipped with an add-on kit consisting of additional batteries, hydrazine maneuvering propellant, helium pressurant and shielding over sensitive equipment for the long-duration mission. Centaur will perform three burns during the mission, achieving low Earth orbit, stair-stepping to a highly elliptical geosynchronous transfer orbit, and then coasting for more than five hours to reach the optimum point to ignite its RL10C-1 engine and circularize the orbit.

The rocket is known as the Atlas V 551 variant, the 12th of its kind to fly. Earlier missions launched spacecraft to Pluto and Jupiter, plus 9 communications satellites into Earth orbit for the U.S. military. The configuration includes a five-meter-diameter (17.7-foot) payload fairing, five solid rocket boosters, and one engine on the high-performance Centaur. This launch will utilize the first Out-of-Autoclave (OoA) fairing aboard an Atlas V mission, representing another stepping-stone to use by Vulcan Centaur.

Learn more about the OoA in a previous blog.

Comprehensive testing of the rocket will be performed in the coming days to ensure all systems are ready before the payload to be mounted atop the Atlas V.

The fully stacked rocket and payload, standing 196 feet (59.7 meters) tall, will ride the MLP from the VIF to Space Launch Complex-41 for the countdown to launch. This will be the 101st launch from the pad.

The Space Test Program (STP) has been breaking barriers to emerging space technologies for more than 50 years as the Department of Defense (DoD) organization to provide space access for research and development (R&D) projects.

STP has executed over 600 experiments on more than 280 missions since its initial launch aboard a Thor Burner II rocket on June 29, 1967. From the early 1970s to the early 2000s, every operational satellite system for the DoD first flew preliminary experiments through the program.